The press tour of Avengers: Age of Ultron started in full throttle and everyone was adorable. I specially appreciate all the cute pictures the cast has been sharing on social media! Oh yeah, of course, the most important thing that happened on the 2015 MTV Movie Awards (sorry, Vin Diesel), was Robert Downey Jr. getting the MTV Generation Award, from the hands of his fellow Avengers. 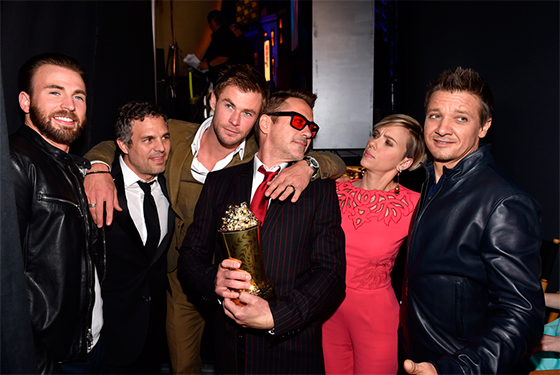 So the first cut of Avengers: Age Of Ultron was three and a half hours long. We better get the extended edition DVD/Blu-ray in our near future, Joss Whedon! In the end, the movie we will get is 142 minutes long~

There’s one or two things that I’m unhappy about not having in there, but they’re small. I said to Kevin before we started, ‘My secret fantasy that’ll never come true is that the second one is shorter than the first.’ And we’re shorter by a minute.

Also, it’s totally not out of the realm of possibility that Joss Whedon, despite nor directing, will make some kind of contribution to the Avengers: Infinity War movies!

They came to me about the movie, and what I said was, ‘I’m tapped out’. And I think they knew that even if I could give them something, it wasn’t going to be anytime soon. […] I love this place and these guys, and I can’t imagine not sitting down and talking about the movies with them, but whether or not that’s an official thing, I don’t know.

The first of Avengers: Age Of Ultron clips are here! First, we have Black Widow calming down the Hulk in a beautifully shot scene, and then we have the Avengers basically tired of Tony Stark’s shit. Also, after the lovely World Premiere, we have this exchange between the Avengers and Ultron and The Twins. The dialogue is very wheadonesque and everyone is super snarky!

Scarlett Johansson talked about Captain America: Civil War and how it’s going to have “psychological twists” and her excitement about working with the Russo brothers again.

When we were doing Cap 2, the film felt very much like we were doing a kind of ‘70s style car-chase political-thriller, it had that kind of flavor. But they were also dealing with far less characters, the stakes were just different. Now with Civil War it’s gonna be interesting to see how they set up this next phase, I think Cap 3 is definitely sort of like a pre-Avengers 3 and 4.

So, apparently the reason we are not getting a new solo Hulk movie (not that I actually want one, no matter how much I like Mark Ruffalo), is that Universal still owns the rights. And that came from Mark Ruffalo himself. The more you know!

As far as a Hulk movie, a standalone Hulk movie, Marvel doesn’t really have the rights to that yet. That’s still Universal’s property, so there’s that issue. That’s a big impediment to moving forward with that. Now I don’t think that’s insurmountable, by the way, but I don’t know where it’s going from here for me.

Kevin Feige revealed how long Spider-Man will be part of the MCU: 2019. At least, that’s about how far things are set in stone between Sony and Disney/Marvel. We will see if it goes further when we get there.

New trailers! First, we had the trailer for Ant-Man, who showed his most trusty ally, Thomas the Tank Engine! Here’s an analysis of the new trailer~

One of the biggest problems about the Ant-Man teaser was that it took a script from a comedic writer, with a comedic director and a comedic actor, then sucked all the fun out of it. […] This [trailer] is doing what the first Guardians Of The Galaxy trailer did: making the film look like it’ll show you a good time even if you’ve never heard of the thing it’s touting.

Another new trailer is Terminator: Genisys one, and it totally spoiled what could be a mayor plot twist! But don’t fret! There may be more things to happen, and here’s Jason Clarke talking about it~

There are still surprises as to what exactly John is ultimately. Is he controllable or not? He’s the last throw of the dice by Skynet and he is something that is a lot more than we’ve ever seen but nobody really knows just where it can go.

So Michelle MacLaren won’t be the director of Wonder Woman anymore, due to “creative differences”. But hey, Captain Marvel may get two ladies as writers: Nicole Perlman and Meg LeFauve. They haven’t worked together before, but it seems they are awesome enough to impress Kevin Feige

Belle star Gugu Mbatha-Raw will be in Disney’s live action production of Beauty and the Beast, sadly not as Belle. That’s Emma Watson. Gugu will play the flirty feather duster Plumette, who was called either Babette or Fifi before.

Here’s the first trailer for Netflix’s How to Train Your Dragon series. And it looks adorable! It’s titled Dragons: Race to the Edge, will run for 13 episodes and will debut on June 26.

Dragons: Race to the Edge follows Hiccup, Toothless, and their friends on a quest based on a device called the Dragon Eye, which this trailer suggests is some kind of magical viking movie projector.