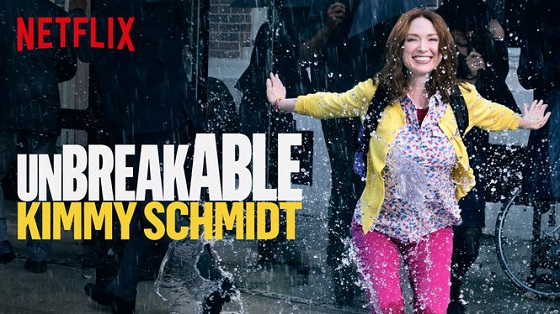 My tv viewing habits has lowered a lot lately due to work issues and other stuff going on. I’ll admit that if it wasn’t for Netflix, I probably wouldn’t have checked on Unbreakable Kimmy Schmidt (created by Robert Carlock and Tina Fey) at all. It was originally produced for NBC, but they pre-cancelled the show and passed it on to Netflix, which has a much wider reach and audience and has guaranteed a second season as part of the transfer deal.

Unbreakable Kimmy Schmidt follows its title character, who has just been rescued from an underground bunker after being held captive along with three other women — all of them now known as “The Mole Women” — for 15 years. Kimmy (Kemper) decides to relocate herself in New York City and start her life over again. She makes friends with her new roommate Titus (Tituss Burgess), and works as a nanny for Jacqueline Voorhees (Krakowski), the wife of a millionaire with many issues who has a past story that sort of mirrors Kimmy’s life.

In spite of its dark origins surrounded by the Holocaust-themed events — and the show isn’t shy about it, especially in the final 3/4 of Season 1 — Unbreakable Kimmy Schmidt is pretty much driven by its highly pronounced feminism, friendships, and it feels like a very upbeat show to watch thanks to Ellie Kemper’s strong, energetic and committed performance as the main lead character who won’t break down despite the obstacles thrown her way, such as losing all of her money and then getting fired by Jacqueline on Day 1 at work only to get rehired later when Kimmy proves her worth by handling Mrs. Voorhees’ son’s (Buckley, played by Tanner Flood) birthday party as well as keeping older rebellious daughter Xanthippe (Dylan Gelula) under control.

All the three main characters — greatly performed by its cast — have to deal with survival in different ways. While Kimmy finds a new meaning in life and her innocence backfires on her to various results, Titus wants to succeed in New York City as an aspiring Broadway performer while also dealing with aging and being a single gay man. On the other hand, Jacqueline tries to salvage her marriage and family while she struggles with insecurities and heritage issues — despite her looks, she was born as a Native American Indian woman. This latter aspect of Jacqueline provides the show a head-scratching feel considering the producers could have casted an Native American Indian actress for the role, but Jane Krakowski is funny to watch nonetheless.

Unbreakable Kimmy Schmidt is pretty funny to watch, with a good part of the humor coming at the expense of Kimmy’s naivety towards modernity and technology since she got stuck as a 90s person in the bunker, but the show doesn’t mock her trauma at all.

While there are some flaws in the show, such as the handling of Charles (Andy Ridings) and Dong Nguyen (Ki Hong Lee) as potential love interests for Kimmy, the major turn-off for me was something inevitable: Unbreakable Kimmy Schmidt has the feel of a network tv series, which is something Netflix would normally avoid. However, the humor, acting (both main cast and guest stars) and writing present in the show makes up for that. Currently, Unbreakable Kimmy Schmidt is now under Netflix’s complete control, which might hint for a potentially darker Season 2 and it will be interesting to watch how it’ll handle Kimmy’s backstory as she continues to live in the city. Based on the quality of the first season alone, Unbreakable Kimmy Schmidt seems to be strong as hell thanks ot its female characters, who are alive, dammit!