The Fangirly Diary of a Geek Girl: And none for Leo DiCaprio, bye!

Greetings, my fellow geeks. The week, besides the usual lovely geeky stuff, we had the announcement of the 2013 Academy Awards nominations, and with them came the snubs. Like Leonardo DiCaprio, who must be used to this by now. Anyway, the geeky week started like this:

James McAvoy wants to be Gandalf in The Silmarillion. McAvoy shows his geeky colors talking about it:

It’s a collection of poems and songs that chart the ancient history of Middle-earth. My true geek is coming to the fore, but they’re really, really beautiful stories. […] In part of that is the genesis of Gandalf, or Mithrandir, or Stormcrow, or any of his many, many names. Anyway, maybe that’s the one!

I think The Silmarillion would work better as a miniseries than a movie. Either way no one has the rights for that one yet, I think.

Here’s a top 10 list of comic book movies that you oughta watch this year! I will watch every single one of them. Some of them more than once~

Woohoo! Best of 2012 according to TV.com. It has favorites of mine like Sherlock and Doctor Who… also RuPaul’s Drag Race and My Little Pony: Friendship is Magic. I’ve told you my interests are vast and many! It also includes the Best of Web Series, where The Lizzie Bennet Diaries gets double kudos as Best New Fiction Web Series and Best Web Series overall. Congrats!

Digging this mashup of The Office and The Hobbit: An Unexpected Journey.

Bunch of Hansel & Gretel videos that include footage, TV spots and interviews. Because this movie will be a hot mess and I’ll be there to watch it twice~

You know the drill: concept art, yay! This time it is a cut scene from The Amazing Spider-Man. It looked awesome too! 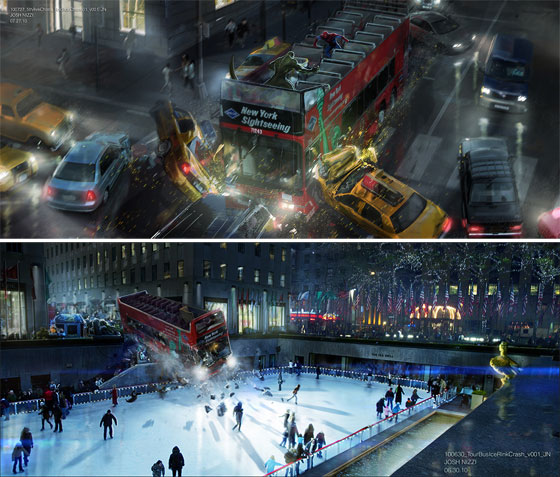 Here’s an interview with J.J. Abrams where he talks about the Fringe finale, 3D, his Bad Robot company, Star Trek Into Darkness… and how he doesn’t enjoy being a coy bastard when he withholds info about his projects:

What it really is about is making sure that, when you go to the movies or watch the show when it airs, you didn’t read the synopsis that came out of my fat mouth because I was answering a question that I was grateful anyone would even ask.  I’d rather people experience it and learn what happens than be told what happens, and see it and have it confirmed.

David Goyer was talking about his new project Da Vinci’s Demons (which looks kinda interesting), then there was talk about a Blade reboot. Well, it was the movie that started all this comic book movie buzz!

Now that Marvel/Disney have recaptured the rights, I’m sure it will be [remade]. They made too much money on that character to not reboot him at some point. […] But I mean, look, between merchandise and what not, that little character generated almost a billion dollars.

He also confirmed that the part of Erik Lehnsherr hunting Nazis in X-Men: First Class was in the script of the Magneto movie that sadly never was.