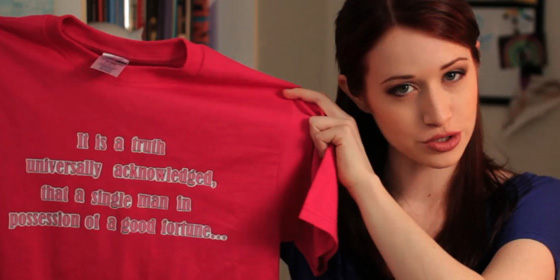 You could not shock her more than she shocks me,
Beside her Joyce seems innocent as grass.
It makes me most uncomfortable to see
An English spinster of the middle class
Describe the amorous effects of ‘brass’,
Reveal so frankly and with such sobriety
The economic basis of society.

Another version of Pride and Prejudice, you say? In published fiction alone, there are: numerous unofficial sequels, an astounding amount of versions written from Mr. Darcy’s perspective, and a handful of genre blenders like Pride and Prejudice and Zombies and Mrs. Darcy versus the Aliens. Film, television, and stage productions have situated Elizabeth Bennet and Fitzwilliam Darcy in period and modern eras; in places ranging from London to India to Israel. What else can be done with this novel?

Pride and Prejudice’s reputation in popular culture emphasizes the romance, with little to no regard for the novel’s social critique or dynamics between family and friends. The Lizzie Bennet Diaries, however, allows Austen’s themes and characters ample time in the spotlight. Charlotte Lu is a much more active character than the ill-fated Charlotte Lucas in the source and most adaptations, and her story is further explored through her sister Maria’s (Janice Lee) videos [YouTube]. While Mary Bennet (Briana Cuoco) is now a cousin, not a sister, she appears in the spinoff videos [1], where lighthearted Lydia shows more dimensions and development for her party girl persona. Lizzie may portray her mother solely with an old-fashioned fixation on marriage, but hints slip that it is the family’s dire finances that fuel Mrs. Bennet’s complaints and schemes. In an especially inspired twist, Mr. Collins’ (Maxwell Glick) proposal isn’t what readers of the novel expect, and certain events bring up ethical issues regarding what should and should not be made public on the internet.

A few viewers note that the wait between videos echoes the wait of those living in Regency England eager for the arrival of a letter, a visitor, or new gossip. What the vlog format also offers is an unreliable narrator interacting in more-or-less real time with us, the viewers. Lizzie and company, like many of us, are entangled by means of online communication. Outside the videos, one can follow story-related posts and interactions on Twitter or other social networks that suit the characters (an incomplete list can be found here). Characters even address selected questions and comments from viewers!

This official chronological directory is comprehensive but about a week behind, so here is the playlist for the main videos. Some of the talented cast are also on Tumblr (links posted on their names above), along with writer Rachel Kiley, producer Jenni Powell and transmedia editor Alexandra Kingsley. The only major complaint about the early videos was also respectfully addressed by co-creator Su on Tumblr.

The fandom is very productive as well, keeping fellow viewers aware of any updates from characters, cast, and crew. One person writes detailed comparisons of the episodes to Austen’s chapters on “P and P vs. LBD” [1], and the amusing adventures of the clay figure Darcybot are posted as well.

The series hasn’t finished — for those who know the novel, they’re still at Hunsford and haven’t reached Pemberly yet — but following the day-to-day happenings is so exciting that I had to spread the word via review before the series ends.

Pride and Prejudice is not simply a romantic comedy, but a story of how communication and economic circumstances can confine and influence choices and emotions. Austen’s presentation of this theme is so familiar that it’s a major feat to create a fresh, vibrant adaptation in any era. The Lizzie Bennet Diaries has accomplished this with brilliance and confidence, transforming centuries-old material into a new media classic.