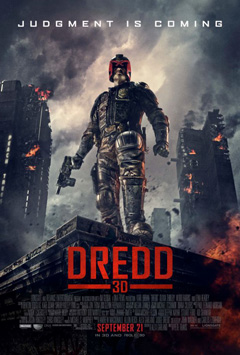 Sometime ago we posted the trailer [1] to this independent British adaptation of Dredd:

Dredd will center on Dredd (Urban) and his rookie partner (Thirlby) who have to battle their way through a high-rise building to stop evil drug lord Ma-Ma (Headey). Ma-Ma’s drug, Slo-Mo, gives the brain the sense that real-time is moving at 1% regular speed.

And as straightforward as that sounds, it is just that. A game of shoot’em up — no high-tension drama of whether our heroes or villains will have a moment of philosophical discovery or any social introspection for its audience. There is just one purpose in Dredd and that’s to get them before they get you.

Even more interesting is the choice to never get to see Karl Urban’s face as Dredd, but that’s because we all got so used to seeing Sylvester Stallone’s wonky face, no? Though Dredd never stops being Dredd, the two dimensional character, it never seems to be an issue. It’s like expecting an apple to be an orange, it’s never going to happen. Who does seem to have an interesting character arc in the story is rookie psychic Anderson (Thirlby), who really stole the show from everyone… which seems a rather simple feat, considering most of the characters in the movie are faceless or come in mobs.

Anderson starts her journey as your run of the mill rookie “judge” wanting to do field work to “make a difference.” Though she’s never a victim, she’s also never a powerful fighting Mary Sue — like, they could have made her kick all those men’s butts when she was caught, but that would have been too Black Widow from Iron Man 2. Olivia Thirlby generally plays ironic “alternative” girls, so Anderson seems against her type, and it’s refreshing. I still think she would have made an amazing Lisbeth Salander.

The biggest feature on Dredd, however, is the action and special effects, given how “tiny” the budget was by Hollywood standards. At $45M USD, it’s sad that it hasn’t recouped at least that amount. Use of 3D is… somewhat interesting, with the high on Slo-Mo drugs being the most visual scenes in the whole movie, especially considering how some of the horrible deaths play out. Loads of “Ow,” “Oh,” “Ah” and laughs were heard all around.

I have no idea why, but thinking back on it as I write this review, I have strong memories of Tropa de Elite — “cops” storm in a “city” to clean up a mess??? I’m surprised movie critics liked this so much, when the former Brazilian shoot’em up cop movie was labeled as right-wing propaganda when, in fact, Tropa de Elite is as entertaining as it is layered with social discussion. As it is, Dredd was super fun to watch, but I’m not sure it would endure the test of multiple re-watches.

Neither did Shoot’em Up.