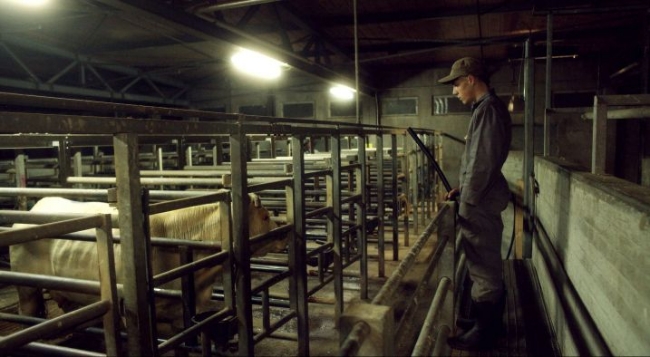 The opening sequence of Maud Alpi’s harrowing yet poetic Still Life (Gorge cœur ventre), which covers about one-fifth of the film’s 82-minute duration, must be the worst nightmare of all animals consumed by humans. Given how Alpi regards them in this film, it is not even debatable whether animals have an inner life similar to ours, let alone whether they’re capable of having dreams and nightmares.

Shot in long, hand-held takes, it unfolds at night at a palely lit abattoir, where nervous-looking cows are poked and prodded into narrow lanes between high walls before being stunned with a cattle gun and then led through various chambers of horror. Alpi may not have seen Lino Brocka’s masterful Insiang (1976), which opened with a similar, albeit much more crudely allegorical, sequence involving pigs, but she is probably familiar with Dante’s Inferno [1].

“No animal gets out of here alive,” the protagonist tells his beloved dog, whose point-of-view receives nearly equal prominence in the film, echoing the famous ending phrase on the gate of Hell inscription generally translated as, “Abandon all hope, ye who enter here.” The animals here, however, seem to have done nothing wrong in their lives.

Incidentally, the young non-pro actor who plays the unnamed abattoir worker boasts the name Virgile (Hanrot). He also shares with his Labrador, who can only howl at the deathly screams of his fellow four-legged friends, the reason behind his current occupation, not to mention his tormented state of mind. It is easy to see the toll his job is taking on him. In a nice touch, he starts hosing himself down after running out of breath during one of his shifts. He would later do the same with those awaiting their demise, for which he is chided by a coworker.

Alpi, who, besides being an animal lover, is likely also a vegetarian, is more successful in contrasting the claustrophobic conditions of the slaughterhouse with the freedoms enjoyed by the young man and, to a lesser degree, the dog than she is in her attempts to conjure up quasi-Malickian atmospherics. This same tendency also often mars Kawase Naomi films. Alpi’s evident understanding of the precarious connection between man and beast, and how even our most generous gestures can be entirely wrong-headed, did not require a metaphysical dimension. 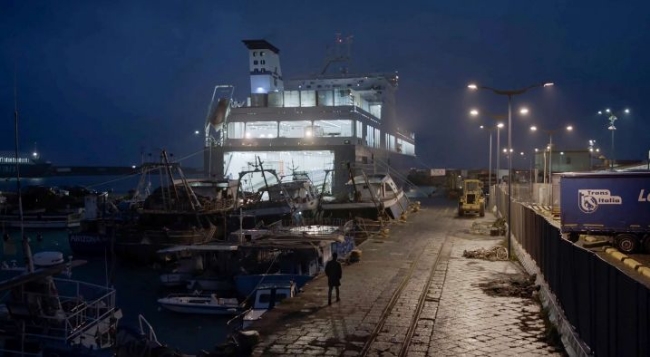 The term “ripped from the headlines” was once generally reserved to describe both the style and content of Hollywood films produced by Warners during the thirties. Those films wore their hearts on their sleeves in more ways in one, even if it was partly to circumvent the ever-tightening censorship policies of the Code era [1]. These days it is perhaps best suited for a certain kind of European art film, at least in terms of subject matter, as most such films tend to be rather reticent in all other aspects.

This certainly applies to the 64-minute Fishing Bodies (Pescatori di corpi), a quiet, probing effort that features a Syrian refugee living clandestinely in an abandoned boat at a harbor in Sicily. The shots of him forlornly looking at a large containership accentuate the triumph of capitalism over human value.

The film’s other storyline, which involves an illegal fishing trawler whose crew members are cinematic descendants of the fishermen who navigated the same Sicilian waters six decades ago in Vittorio De Seta’s Contadini del Mare (1956), strongly hints at the neglect that has led to a number of tragedies in Europe’s migrant crisis. Even if the film seems hesitant about saying it out loud, it is very much about the here and now.

A Swiss production, Fishing Bodies is directed by Italian-born Michele Pennetta (b. 1984), who studied at the École cantonale d’art in Lausanne. It is the longest film he has made to date. 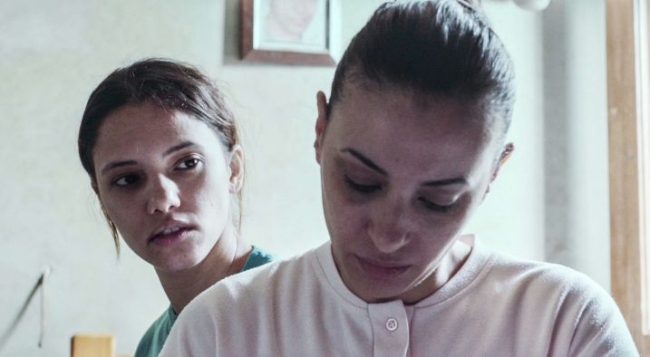 Thematically speaking, Withered Green (Akhdar yabes) is reminiscent of women-oriented films produced during the golden age of Egyptian cinema [1]. That is as far as any similarity goes. This debut feature by Mohammed Hammad (b. 1980) is so resolutely understated and oblique that it almost feels like a deliberate response to many of the theatrical and melodramatic trademarks its national cinema continues to possess.

Built through a steady drip of quotidian gestures and moments, the film revolves around a reticent and religious woman who, as per tradition, tries to acquire the services of a male family member for the engagement of her younger sister. She is further occupied by the impending test results involving her menstrual condition, possibly the reason behind her single status.

Hammad’s abstract, minimalist visuals perfectly compliment the film’s reserved emotional tone. He often shoots his protagonist through reflective glass or in transitional spaces to subtly emphasize her psychological state. Not surprisingly, the film is at its weakest when it does try to make a statement. Thankfully, those moments are few and far between.