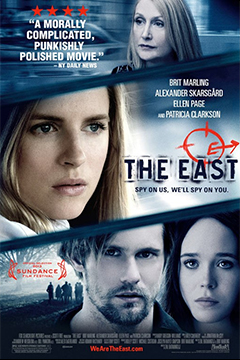 “Why does someone do a job like this?” asks Brit Marling’s character in her latest film, The East. That question is one that everyone will ask when they witness what writer-director Zal Batmanglij and lead actress-writer Marling present.

Where Batmanglij’s debut, Sound of My Voice, showed two amateurs infiltrating a cult, The East focuses on professional operative Sarah Moss (Marling), who is assigned the task of infiltrating an anarchist collective known as The East.

The abundance of films choosing to focus on the war of terror leaves one with a stale taste in their mouth, and yet Batmanglij and Marling comment on it in a smarter way than exploding buildings and sending people off to war. By transposing the “war on terror” to the US itself, honing in on eco-terrorists and pharmaceutical companies as the two sides, the writing duo place an emphasis on just how real this idea of a war on terror can be for American audiences.

Brit Marling’s character can be seen as a soldier for the “good,” or rather, the team that isn’t labelled terrorist, even though they defend the people who poison families all across America. It’s a case of morality being constantly questioned and her performance brings that out perfectly. She dives into the world of The East, only to find herself feeling out of place when she returns to reality. It’s a reflection of PTSD and truly haunting in the way that she reacts to situations, knowing that she isn’t the woman she once was and just how little she really knew the people she worked for.

The East makes a note of having Sarah Moss torn between two worlds, one with Patricia Clarkson’s hardened intelligence firm boss and the other with Alexander Skarsgård’s softened eco-terrorist leader whose entrance practically mirrors Jesus at the last supper, with bonus straight-jackets. Each wants to pull her one way, always emphasizing this notion of “hard” and “soft” in Sarah’s personality. This all ties hand in hand with the idea of her as a recovering soldier, as Sarah is thrown into the field again and again by her uppers, constantly manipulated by each side.

One scene in particular leaves a lasting impressive about this lack of control, and it’s almost a baptism of sorts. The eco-terrorists are bathing in a lake and Sarah is being held and bathed by many of the members of The East. They whisper to her that she’s in control as they wash her body, but the expression on her face is of near terror. She feels that she doesn’t have an ounce of control from any side and it couldn’t be clearer to the audience because of this scene.

Batmanglij and Marling’s dedication to the story and their character is impressive, as is the way they lace together the most inconspicuous details into important plot points, but their message can get a bit overbearing at times. The idea of freeganism, eating the trash of others, is nothing hard to handle. It is the stony looks that Ellen Page, Toby Kebbell – both of whom give great performances – and the others give as they border body horror by cutting into animal corpses that can be unsettling in the wrong way.

Whatever flaws it may have, there’s something admirable about the film that Zal Batmanglij and Brit Marling have put together. With Alan Pakula’s politically laced thrillers of the seventies in mind, one can only hope they’ll keep bringing forth material as great as this, as The East is already a step up from Batmanglij’s debut Sound of My Voice.