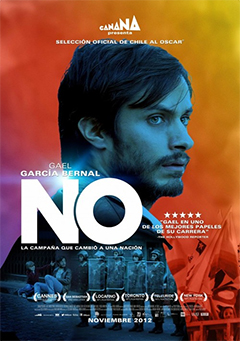 Pablo Larraín has dedicated his last two films, Tony Manero and Post Mortem, to looking at two very different people within the Pinochet era in Chile, and his latest film continues in this fashion, bringing the era — and his trilogy of sorts — to a close.

No takes place in 1988, right as Chilean dictator Augusto Pinochet was being pressured into having an actual election to decide whether or not he would continue to hold power. Chilean voters were offered a simple choice: YES or NO. Each answer had its own campaign, with 15 minutes of screen time each night to present their thoughts. No gives an interesting look at both sides with a large focus on the underdog, headed by the young but talented advertising executive René Saavedra (Garcia Bernal).

The darkness that comes with a Larraín film is clear and present, but with it being the first of his films he did not write, there’s an all too different magic at play here. Truth be told it does fall into a familiar underdog pattern that has been done again and again. Creative differences all around and intimidating tactics from the dictatorship threaten to take them down, but as history has shown, violence doesn’t always work. In a time overflowing with dramatizations of US history, there’s something fascinating about getting a glimpse into another country’s historical events, as an outsider looking in. And that’s exactly what Pablo Larrain presents: a glimpse into the past.

Everything about No‘s production feels like it’s straight out of the eighties, from the costumes to the shooting style. There is absolutely no denying that the way Pablo Larrain, and frequent collaborator Sergio Armstrong, shot this film was genius. Utilizing the U-Matic to shoot like it was the eighties is a move that makes this film as pure a period piece as it gets. It allows for the seamless transitioning between archival footage and the narrative being told, all in the name of history.

The performances are all top of the crop with Gael Garcia Bernal guiding the film in his his lead role. The fear and pressure his character is put under does not distract him from his job, and the way Garcia Bernal portrays this unlikely leader for freedom is excellent. Opposite of him we have his supposed friend, the leader of the YES committee, played by Alfredo Castro, who has been in all four of Larrain’s films. It’s clear that Castro is a powerful force in the film, and the two share the screen together beautifully, neither one stealing the show.

No may not be the most intense or dramatic historical piece this year, but it’s certainly one of the most interesting ones around, with an excellent production standard that makes it one to look out for.