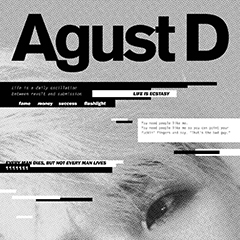 What happens when the bull, stuck in his pen, egged on by the constant jeers and boos of a crowd that wants to see him bleed, is finally set free? The moment he sees red, he charges, and God help the poor soul at the end of those horns. Suddenly our hero the matador emerges, full regalia and sharpened lance at the ready. To the amused and adoring cheers of the crowd, he goes about the job of taunting the bull to get near, picking the poor animal apart, baiting him so he can strike the fatal blow.

After BTS fans waited what seemed years for the seemingly quiet and aloof Suga to release some solo music, they were blessed with the release of his semi self-titled Augst D. When the bull was finally let out of his pen, not a soul in the world was ready for the charge.

In his defense, it’s not as if Suga didn’t give the expectant listener fair warning. He opens the album calmly, asking you, “Are you ready?” You have a breath before the album proclaims, “Give it to ’em.” Then with the first scratch of a James Brown wail—befittingly from classic It’s a Man’s Man’s Man’s World, another dig at the boys and toys who’ve tried and failed to step to Suga with candy bars—all hell breaks loose.

The battalion is ready, drumline in full color and pomp. He gives you another few moments to prepare yourself, and then he just goes the hell off. The introduction to his alter ego is ferocious, guns blazing and ready to spray anyone in the blast radius when he squeezes the trigger. “They call me new thang,” he proclaims, and Suga truly is brand new. Whatever you may have been expecting is absolutely irrelevant.

Agust D comes at you in stages, just as the artist it’s named after. He bursts into the cochlea all bravado as Agust D, but as we peel back the layers of the album, dig further into his psyche, we see the rise of the sparkle and idol shine of Suga as he crawled from the ashes of a starry-eyed and starving Min Yoongi.

The album is essentially retrogression. He first gives us the sharp tongue of a bona fide street rapper (Agust D, Give it to Me), calling out anyone who may have tried to step to him with no better material than his role in an idol group (many infer specifically B-Free, who in the past wasn’t shy about putting the rappers in BTS on blast). He draws his line very deeply in the sand, stating, “You can’t take me. All you fried rappers should be thankful I’m an idol.”

As the mixtape goes on, however, more and more of the surface bite and snarl slowly drops away, and we’re left with a very raw, very real representation of the man before us. Depression isn’t a subject most in rap are wont to tackle. In this world of put-on hypermasculinity and hyperaggresive chauvinism and machismo, ain’t no room for crybabies.

But in about the last decade more rappers have scratched tentatively if not bitterly at the surface to look deeper than the skin. Though not a trend started by Kendrick Lamar, with his To Pimp a Butterfly, he tapped aggressively into his demons and laid them bare. Suddenly it was okay to be honest with one’s self.

In walks Agust D, a palindrome for D-Town Suga, the very name suggesting a look back in reflection. The BTS rapper from Daegu carved himself a small space in Korea’s underground rap scene, then emerged from relative obscurity to become part of one of K-pop’s most popular idol groups. Many fans have taken it upon themselves to remark on the young man’s stoicism, many settling on joking away his quietness, at worse criticizing Suga for not playing a game most idols fall into as a matter of course. With the first spelling of his name followed by a cacophony of sounds and a couple warning shots in the air, he takes off the mask and muzzle and reintroduces himself.

This is a man trapped in his own mind and body, unable (or maybe unwilling) to share the most intimate parts of himself. It’s plain to anyone Agust D is his chance to let go of all the pain and ugliness resting in his chest. Tracks The Last and So Far Away tap wholly into that reservoir of both self-loathing and a mean depression (“Sometimes I’m afraid of myself thanks to my self-hatred and the depression that came into play”; The Last). He’s stripped away the crass of Agust D, the glitz of Suga, and has bled out until all that’s left is the shell of Min Yoongi. He fashions himself both the bull and the matador. His honesty is sharp and exacting, and the deadliest end of the knife he points at himself: “Min Yoongi is already dead (I killed him). It’s been a long time since my everyday life became killing my passions and comparing myself to others.”

If Agust D is his braver ego, Suga his superego, then Tony Montana is his scarfaced id. He admits to craving that milk-thick pour of cash (“4 5 6 7 8 9 cream, got money on my mind”). His not-so-subtle nod to Wu-Tang Clan’s CREAM is a telltale sign of his shedding the skin of the fresh-faced kid from Daegu and becoming that all-consuming beast.

But do not mistake his emotional honesty for weakness, or at least a weakness to be exploited. Don’t for a second get it twisted. The man can handle himself. Well. He’s got enough ammunition in his lyrical arsenal for anyone who’s tried or will try to bring him down with their own lack of vision.

There’s calamity in the music, riot. It’s a mad story, unsettled and ready to burst. Yet Yoongi is calm, calculated. Though wild, there’s nothing wasted here. Each word penned, then purged into digital mapping means something, means everything.

Agust D. From the title to the very album cover the mixtape holds nothing back. Suga is raw, unapologetic, honest. I liken Augst D to Schoolboy Q’s Oxymoron: dark, sinister, ugly. None of the prettiness many fans see in his stage performances. His heart, body, and mind are all spilled sloppily on the wax, the excesses of his honesty settling into every groove, every kilobyte of memory. If hip-hop in its rawest form isn’t your cup of tea, you’ll want to run and hide. This is an album best suited for those who want something ferocious and unpretty. Forget “wigs” and “edges.” Agust D is coming for souls.

Suga (and BTS) released links to places you can download Augst D for free here on their official Twitter account. You can also stream the album from BTS’s official Soundcloud.