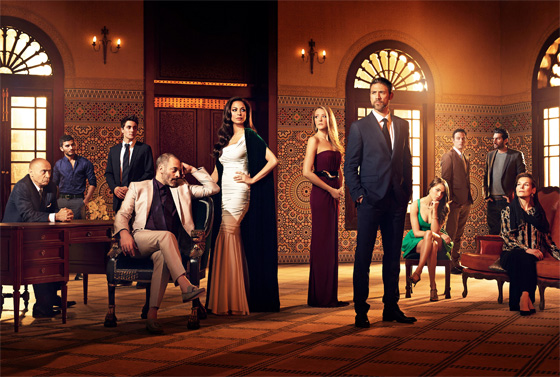 You’ve seen the news, the Middle East has been a bag of a big mess. Americans (and other Allies) don’t know what to do to fix the world’s problems, so what could be tastier than an American show of people of different backgrounds dealing with the (political) destiny of a make-believe Middle-Eastern nation, Abuddin, that has been ruled by Khaled Al-Fayeed (Nasser Faris) for over two decades.

The pilot directed by David Yates follows American-based blue-eyed Bassam ‘Barry’ Al-Fayeed (Adam Rayner), Californian pediatrician and Abuddin escapee when he was a teenager, straining his relationship with his dictator of a father. He married white American Molly (Jennifer Finnigan) and had pretty much white American children — elder closeted-gay Sammy (Noah Silver) and younger condescending Emma (Anne Winters) — a family who’d never heard much of the Al-Fayeeds except for what they heard in the media because Barry is blocking away the memories of his eventful childhood.

That is, of course, until they get the invitation of Ahmed (Cameron Gharaee) and Nusrat’s (Sibylla Deen) wedding, Barry’s nephew and the only son of his psychopath of an elder brother Jamal (Ashraf Barhom), successor to their father’s throne, amidst the struggle of the Abuddin people — mostly lead by the Rashid family (resistance leader Ihab (Alexander Karim) and his exiled father (Mohammad Bakri)) — for democracy.

Though the series is actually kind of decent (its best element being production design), the biggest fault with Tyrant is that is HAS to be a show about an American family seeing this Middle-Eastern nation through their point of view, because people can’t watch shows with non-white leads, right? So to quote Jamal on his own brother~

Remember what you said, Bassam, the night you called to tell me? You said you had found a woman who accepted you for who you really are. Moralistic. Self-righteous. Holier-than-thou.

It’s these qualities that Jamal highlights in his brother that annoy the heck out of a lot of people so much that you laugh with it, agreeing. The first half of the show it’s mostly focused on Barry and his family; they seemed mostly dazzled for being royalty while Barry just wants to go back to the U.S., because we all know this place will change him, though, this eludes his wife as if she’d never seen a paper on (or Googled) her husband’s family before. Backstory and interaction within them is poorly written, because many make little sense or are poor excuses for plot points (eg. Molly’s sister arriving); which brings me to this point: there’s SO many characters introduced in the story, that you don’t really care much for most of them, including the Senior Al-Fayeed, who passes away soon to give way to the political turmoil and the power struggle; U.S. diplomat John Tucket (Justin Kirk), the Rashids, as well as opposition journalist Fauzi (Fares Fares) and his daughter (Mor Polanuer), and those are the most notable.

However, Tyrant is brought to life by an unlikely anti-hero in the shape of the rapist psychopath that Jamal gets to be. I don’t think that I’ve ever sympathized with someone on-screen who’s raped women and killed, and I don’t think Ashraf Barhom was ever meant to steal the show from Rayner, who gets his best scenes whenever he’s away from his on-screen family, but the elder Al-Fayeed is such a morally-conflictive character and is played with such conviction that you believe when he says he’d do anything for his family, whereas whenever Barry excuses his actions saying he did it for his brother, you don’t actually believe it. It’s the moralistic issue we’re talking here, and it’s their contrast and interaction that usually makes the show interesting, as well as Moran Atias who plays Leila, Jamal’s power-clinging and unapologetic wife. I love the whole “blood is thicker than water” theme that the Abuddin-based Al-Fayeeds have, so it makes sense for Leila to tell Barry that between the two of them [him and his brother], he was the monster.

I wish the show wasn’t mostly in English, though. It’s a pity they couldn’t settle for at least 50% of subtitled dialog like in The Americans.

Extra quarter for Barhom and Atias.