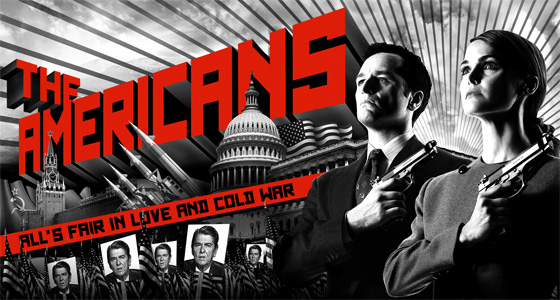 First, it’s pretty crappy that I can’t even access the FX website. The least you could’ve done it’s to redirect me towards the Canal FX page. Not everyone sets their search engine to their regional option, okay?

Anyway, I spent the weekend trying to catch up with 2-3 years of American television, and The Americans (no pun intended) was one of the shows I’ve stuck around with (besides Masters of Sex and Tyrant). I had caught a couple of episodes late LATE at night, and finally decided to check it out because- what’s not to like? Loads of political stress, spies, Margo Martindale, and Russian-American counterintelligence. It’s like the current political stand-off, but set in the 80s, and slightly less annoying results.

In the first season of the show, Keri Russell (yay!) and Matthew Rhys play American couple Elizabeth and Philip Jennings, travel agents and parents of two average American kids, but are also KGB agents Nadezhda and Mischa, sent to the U.S. in the 60s to complete different missions every other day as the silent war between America and Russia rages on.

Tension arises from the Reagan assassination attempt, loyalty struggles, FBI-KGB cat and mouse games (and eff-ups), and there’s trouble in Elizabeth and Philip’s fake marriage. There’s also the fact that FBI agent Stan Beeman (Noah Emmerich) has moved into the Jenning’s neighborhood, and he is on the case of looking for “the illegals,” as these agents are known.

Ever since… who knows when (maybe since WWI hit Europe?), media in the Americas has been largely dominated by American entertainment to the point that we’ve grown with and tired of seeing them as the good guys on stories where the bad guys are rendered as one-dimensional evil-doers. We’ve gone from the Nazis, the Japanese, Russians and the Chinese to our current North Koreans (hitting a high point with Red Dawn) and the Muslims. However, very much like South Korea’s The Berlin File, the concept of The Americans where Russian spies get to worry, feel and hurt is… surprising.

Though the show takes off in a slow start, with a lot of talk and never enough slick Hollywood butt-kicking (I’m guilty!), it’s thrilling to see Russell and Rhys stressing out over the escalating danger of their missions, as well as their conflicting natures. It reaches its best moment in episode 6, Trust Me, when Elizabeth hands KGB supervisor Claudia’s — played by Martindale as a refreshing stroke of genius casting — butt in a raw and chilling spur of an anger and frustrating moment. In fact, Claudia and Elizabeth are two of the most interesting characters because they’re the least common to see on screen. Claudia has a backstory that has only been exposed through her own telling in limited amounts, her loyalty lies in what she’s experienced through those years in Stalingrad, while Elizabeth’s story with her mother goes in perfect contrast to the one she’s experiencing with her, sort of, forced daughter (Holly Taylor).

My least favorite element is Emmerich’s Beeman, because he’s basically “your good guy” in the story, even though the writers try hard to give gray qualities to his personality. However, even when they manage to smear him with some dark paint, it ends up being boring (eg. the shooting of the agent). His character, and the whole FBI team, are so unlikable that you can’t help but root for the spies to the point that when KGB-agent-turned-FBI-informant Ninotchka [zing!] (aka. Nina, played by Annet Mahendru) pleads to Beeman that they gotta get her out of there, even though we know it’s impossible, we hope that she’d get killed, so that could eat Beeman’s conscience away. But that’s not gonna happen.

Bonus points for all the Russian and subtitled bits of dialog between agents, even though the pilot makes an odd introduction of Elizabeth speaking in heavy-accented English, instead of picking just plain English or Russian. That’s at least one thing better than Tyrant.