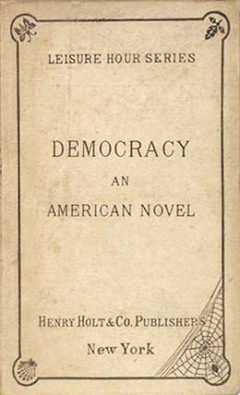 Published anonymously in 1880, Democracy reads today as a fascinating look into a Washington with slightly different political parties but sadly similar political mechanics. Only thirty years later was the author revealed to be writer Henry Adams, son of President John Quincy Adams and grandson of President John Adams.

Unlike most novels in the roman à clef genre [Wikipedia], Adams chooses not to parody specific personalities of his time. Instead, his characters embody the types of people he encountered in the nation’s capital — a choice that allows for greater accessibility for current readers.

Fortunately, most of the characters are developed past mere mouthpieces or satirical sketches. Madeline’s mature charms veil a burrowing intelligence, as she quietly probes and prods politicians’ egos in her exploration of government machinations. Her parties lure many Washington elite, and the influential senator Silas P. Ratcliffe becomes a constant presence. A complicated war of attraction and manipulation ensues, forming the novel’s central conflict.

While Adams voices some overgeneralizations about male and female psychology, the statements more or less fit the worldview of the character in focus at that point in the novel. He may say that the woman’s mind is with the family and not politics, but it is notable that Madeline is seeking to further not her romantic prospects but her intellectual horizons. Even her bubbly younger sister Sybil proves to be no frivolous society flirt.

Ambition and division run rife through Democracy, with the beginnings of modern progressive movements and the remains of the South’s Civil War loss. There are stretches in the middle of the novel that feel too dry and distant; otherwise Adams’ prose is efficient, articulate, and even lovely during some descriptive passages.

From the dresses of Worth to the particulars of regional rivalries, the details sweep the reader into a world of hushed gossip and emotional upheaval, where ideals degrade into selling points. This American election year, I’d recommend reading Democracy for an opinionated but fresh vintage perspective on politics.