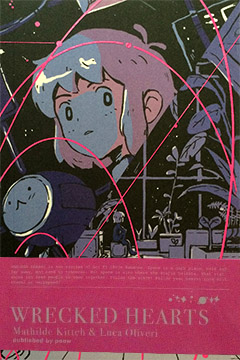 And appearances really can be deceiving according to the thread that connects the two standalone stories contained in this volume. The Real Thing by Luca Oliveri tells the tale of a shapeshifter who falls in love with a human from the same space colony as her, whilst the main hero of Dark Energy by Mathilde Kitteh is a cosmic entity who has taken human form, falling in love with a robot who does the same. Each of our protagonists is a teenage girl, or usually in the form of one, as befitting the shōjo flavor of the book, a romantic manga sub-genre that usually features the female teen readership it aims for.

Wrecked Hearts is no pastiche or parody though, nor some second-rate footnote that you can look over in place of the real thing. Each story features a gentle yet striking color scheme, and more ideas than most sci-fi writers can come up with for an entire book series. Seriously, only Steven Moffat of Doctor Who comes close to some of the inventiveness on display here. But while a North American take on such manga would probably ramp up the SF parts to the Nth degree – think Scott Pilgrim –  or overload the perhaps ‘kinkier’ aspects of shape-shifting, the stories here have a more subtle, more respectful European sensibility to them, a thoughtfulness that manages to make space for the outré details that stick with you long after you finish the book – particularly gassy aliens, for example, or secret gender-bending fantasies, with all of these things managing to mix well with the wistful love stories that they work around.

The book therefore sits alongside Hanna K’s New Frontier and Wrecked Ship by Valentin Seiche, the previous comic-format releases from PEOW! that also feature crayon-soft tales from a manga-esque utopia. Following these two, Wrecked Hearts really does cement Peow! as a creative house to look out for, one with a long future ahead of it. Here’s to more great pan-cultural comics!

You can check a copy at PEOW! Studio’s online shop.