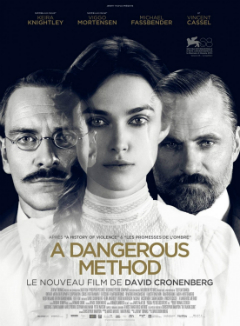 Freud against Jung in the battle of the human mind. Mortensen against Fassbender in the battle of hottest man in a mustache — A Dangerous Method takes us behind the friendship and rivalry of the two great men that established modern psychology.

What makes A Dangerous Method so lovely is Mortensen and Fassbender. Taking on such roles as the forefathers of modern psychology, it is obvious that much preparation was done. I was really impressed with them both.

Before I go on with my review, let me get the bad stuff out of the way: Keira Knigtley. She plays the role of Sabina Spielrein — a woman who also contributed to the growth of modern psychology as well as acted as some form of pawn between Jung and Freud.

The role of Spielrein is an important one — she is the woman that makes Jung’s morale crumble, she is the one that leads him in other directions regarding psychology. Add to that the deep psychological issues Spielrein suffered from, her role is one of the strongest ones.

However, in Knigtley’s care, it became ridiculous. I didn’t find her convincing when she was playing “mental”, nor did I find her broken English with a Russian accent that convincing. She was meek in this movie. I felt she disturbed the great balance that Mortensen and Fassbender created.

Fassbender was in command as Carl Jung. With his stoic demeanour and calm nature, much of the acting was done through the eyes. Then with Mortensen as Freud, I can’t but laugh. Freud was such a perv and Mortensen executed the role with such charm. Pervy Freud…

As a movie trying to shed light on historical matters, A Dangeorus Method is an entertaining and informative movie. Had it not been for Knightley, it would have been one heck of a movie. Sure, the two male leads do more than pull their weight and demand all the attention, but Knightley irks me.

As I watched the movie, I kept thinking about other actresses that I felt could have done a better job, so my focus was mostly on that rather than the movie itself. Therefore, her presence ruins the whole movie experience — and I think that pretty much sums it up.