Something in the Air (French Film) 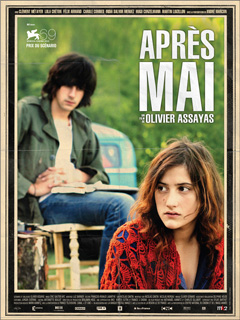 Something in the Air, which won the Golden Osella for Best Screenplay at Venice Film Fest, is a semi-autobiographical film by the French director Olivier Assayas. Despite being totally different from any of the helmer’s previous works, this new film comes a little closer to the realistic and familiar style depicted in Summer Hours, rather than to the vibration evinced in his remarkable masterpiece Carlos, or to the creativity and experimentalism of Irma Vep.

The story, set in the turbulent France of the early 70’s, focuses on Gilles (Métayer), a young radical high-school boy whose time is basically spent in riotous student movements, painting, and amorous relationships, which would become meaningful in this crucial phase of his life. Therefore, a big emphasis is given to his early romances with Laure (Combes), an aspiring actress who departed to London to get lost on drugs, and Christine (Créton), his close mate on the revolution that students were trying to carry out. These were not impetuous romances, for sure, but they were depicted with an inherent sensibility and in a non-sorrowful way, which is commendable.

The curious thing in Something in the Air is how these two girls left Gilles to go their way with older men, which conveys the necessity of growing up fast and becoming recognized in their fields of action. Assayas knew what he wanted from the actors, whose expression and characterization reminded me some of the works by Christophe Honoré, but in my eyes, Christine, the most radical member of the group, could have been explored with a little more focus. The confident objectivity showed behind the camera made the difference, even if in some moments the film doesn’t get the appropriate vigor for better serving its intentions. In truth, except for the fighting scenes between activists and police, the film runs in a passive tone that doesn’t provoke the viewer, making the revolutionary attitude of its characters get a bit lost on the screen.

Occasionally, some political ideas and artistic considerations taken from books are pronounced, making the film enter in a slow motion that some viewers will feel hard to endure, but these are part of the main character’s maturation process, until he finally gains awareness and decide to foray into the world of cinema, strongly driven by his father.

As a curiosity, Assayas’ father was Jacques Rémy who directed a single film and was better known as a screenwriter.

More personal and intellectual than properly striking or bold, this film certainly must have a huge sentimental value for its author, but for me it just became likeable and partly satisfying.