Amy’s Blast from the Past: The Father of Chinese Rock

I really didn’t know much about Cui Jian, other than knowing him as The Father of Chinese Rock and seeing him that one time on that seldom CNN Talk Asia episode where they actually talk to Asian personalities [1][2][3] instead of Western personalities in Asia.

Born in the Korean minority in China, Cui Jian (influenced by the Rolling Stones and the Beatles) brought Rock n’ Roll to China in the 80s, despite being a classically trained musician, and became… er… the sound of the Revolution when his song Nothing to my Name (一无所有) [1] became the tune to the student protesting at the Beijing main square. 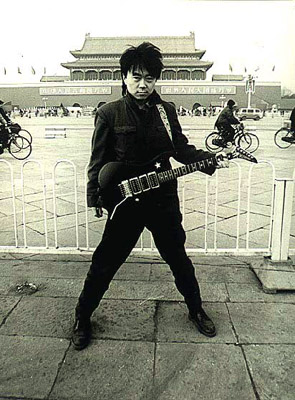 You know, you know that square and what protest I’m talking about~

Banned for a few years, Cui Jian has been sort of back doing performances since the early millennium (including shows in Taiwan and Beijing, so no biggie), he even got to perform with the Rolling Stones (after the 2003 SARS scare).

My favorite song of his is probably Fake Monk (假行僧), which feels like it’s the story of a wandering “monk” or, I guess, a “traveler” that talks about what he wants and what he doesn’t in very contradicting terms at times (like “I want everyone to watch me but not know who I am“), but my favorite verse is at the end when it goes:

The guys at R2G Music, one of the few digital distributors of Chinese music, have recently released a compilation with some of the most recognizable  songs from his career that includes the two tracks linked above, alongside 11 others. Titled The 3rd Sound of China, you can stream the compilation on Spotify, and purchase from iTunes.