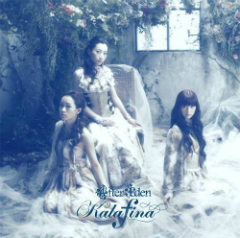 Imagine a cross between the Chinese group Twelve Girls Band and the Irish vocal group Celtic Woman, and then add awesome guitar solos. You get Kalafina’s After Eden.

This album emphasizes Kalafina’s strong vocals, infusing them with mystical music. These girls’ voices aren’t the stuff of legend, though. Don’t let the ‘pretty’ appearance of their album cover fool you. Songs like September and Symphonia will show you the almost ethereal power of this female trio.

The album starts out with the folkloric, fantastical title song Eden, quickly escalates into more epic songs like Magia, then transitions into surprisingly heavy rock songs such as Destination Unknown. The variety of rhythms and styles will surely impress you. Do beware of very long songs, but I assure you the quality of the music won’t bore you. Plus, I have to say, there are some pretty amazing guitar solos on this album.

As a whole, After Eden is a very dramatic album with great moments and magnificent composition. Anime fans will love it for its inclusion of theme songs Magia and In the Silence of the Shining Sky for anime series Magical Girl Madoka and Black Butler, accordingly. Everyone else will love it for its rich musical content and variety of styles.