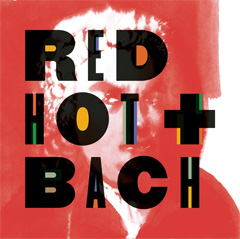 What comes to mind upon seeing the catch term “Red Hot“? The flame … of passion? Or “Caution! Dangers ahead!” …? Red Hot + Bach apparently encompasses both notions in one same album, although in different respects.

As much as Johann Sebastian Bach’s music constitutes a significant bulk of the Baroque musical period, an era shortly following the Age of Enlightenment in which sanity and rationalism were at the core of philosophy and culture, it somehow came as no surprise that few would associate Bach’s compositions with “passion” — whether on an intellectual or amorous level. But then, just like how William Shakespeare’s Romeo and Juliet has allegedly stood the test of time with (post)-modern cinematic reinterpretations such as the ones starring Leonardo DiCaprio and, more recently, Douglas Booth, the Bach pieces in this compilation album have also been “contemporarilized” — both in terms of musical arrangement (e.g., some keyboard pieces are vocalized) and choice of musical instruments (e.g., the use of electronic synthesizers).

Call it “ambitious” … But how much of this is backed by matching, tasteful musical artistry? A compilation album comprising across-genre re-creations of musicians and artists of our time, some parts of this “Baroque meets Contemporary” chemistry turn out to be more successful than others.

Ideally, an optimal equilibrium for any re-creation in this album should (1) preserve the most distinguished elemental hallmarks that have contributed to the unparalleled immortality of Bach’s music, while (2) thoughtfully and sensibly amplifying the intended emotions to be conveyed by the music itself according to contemporary norms of temperamental expression.

The key to achieving this, personally, is how NOT to overdo it.

The more successful attempts, as measured against these yardsticks, include: (a) Minuet (Rob Moose and Chris Thile), whereby the subtle, bouncy agility of this little dance piece is appropriately energized when played on the classical guitars; (b) Very Own (Julianna Barwick), in which the artist’s well-conceived application of echoing vocals rightfully convey the intended sense of immaculate solitude in a more readily relatable modern sound than that of the harpsichord; (c) Contrapunctus (Max Richter), in which the defining characteristic of having the recurrent musical theme appear in differing parts and variations in a fugue is preserved, but with some most unexpected brief pauses as a pleasantly surprising twist of the modern times. Jardin do Amor (Mia Doi Todd), and Time Drinks Three Shots (Shara Worden), among others, are also likely to be “heart-throbbers.”

Considering that the other notion of Red Hot is essentially a charitable “Fight AIDS around the world” cause, it might seem a little harsh to denounce a few of the tracks as being slightly “overcooked.” But as a reviewer, I really wish that endeavors like Number Man (Paul de Jong), Air (Daniel Hope), and The Watchmaker (Stuart Bogie and Grey McMurry) had taken a more minimalist and less bombastic approach, one that is more in keeping with the fundamental spirit of Bach’s music:

Sublimation. And peace of mind.