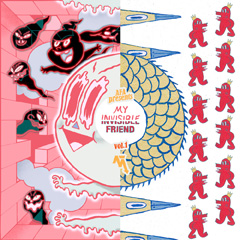 What happens when fourteen musicians get together and decide to do a musical version of “The Exquisite Corpse”? It seems My Invisible Friend, that’s what. Taking the idea of the unfinished masterpiece and transplanting it onto digital coding may seem a dangerous endeavor, but these artists were determined to create something grand. And they succeeded with flying colors.

My Invisible Friend is one of those collaborative efforts that could be either brilliant hit or exceptional miss. With different artists who don’t see each other during the process, the chances of clashing personalities and musical vocabulary are incredibly high. And musicians being what they are, attempting to recreate the classic game of “add and pass” could result in more than just explosive ideas, but potentially explosive tempers. That being said, the work that came out of this experiment was nothing short of amazing. AFA Sound Machine certainly had their hands full with all the creative and oftentimes “out there” music that managed to come together.

Of all the surprising things that could have come about with this project, one thing that isn’t surprising is the sheer expansiveness of the final products. With each artist being both headliner and featured guest, the stylistic explosion was bright, bold, and completely boundless. The opening (and title) track of the piece sets the whole thing in motion, though where you’ll end up is anyone’s guess. Cloves and Stolenmeltdown offer us something refreshing and vibrant, mostly acoustic with moments of interstellar electronic sprinkled in to whet the palate. This sets the stage for some truly exceptional music.

What My Invisible Friend manages to do is create a sound that takes from the earth and then injects it with electricity. We get soundscapes that are raw and natural but also manage to be technologically progressive. The album is most certainly a ballet of ideas and musical scope, an aria with multiple movements and moods. It’s both organic and completely awash with all the fun and adventure part in parcel with experimenting with all the things a soundboard can actually do. In that vein, you get tracks like The Coconut Monkeyrocket and The Cow Goes Moo collaboration “Aunt Fish.” It starts off with a warped psychedelic twine, then morphs into a playful little ditty that sounds like something from a Captain Beefheart album.

In fact, that’s pretty much the impression I get from this piece of art. As we continue on throughout the album, we get instrumental pieces that dare us to explore the boundaries of our musical appreciation, songs like “Arcade Bee” and “Field of View” that put our minds into a different state altogether, as if on a linoleum square magic carpet ride through the cosmos. There are also songs that play on our nostalgia for the early electronic pop of the 1980s with artists like A-ha and Tears for Fears (“Inidadbodja” and “Amig@ invisible”). But whatever part of your consciousness, each song reaches you and forces you to at the very least revisit some of your previous understandings of specific genres. The album closes with the Néstor +3 and Tottorinos collabroation“Me Voy a dormer” (I’m going to sleep), a warped sort of lullaby that at first soothes, then bombards you with feedback and sound until you’re forced to wake the hell back up — which pretty much sums up My Invisible Friend as an album.

My Invisible Friend is a beautiful project with a roster of musicians who take their craft to the brink to deliver a truly exquisite corpse. The “cadaver exquis” has come alive, and the music it makes is truly remarkable.

You can listen to and buy My Invisible Friend on the AFA Presents Bandcamp.