As I wrap up my experience at SXSW, I couldn’t go without mentioning probably one of the more… invigorating showcases I saw while I was there. A few of our comrades in arms had heard about this metal band from Leeds. If I’m remembering correctly, they’d performed at South Korea’s Zandari Festa in the past. When they were announced for SXSW, our ladies decided we just had to see them perform. I figured, what the hell, I’m up for anything! So we trek back over to ScratcHouse (the venue we’d previously hiked over to in order to see XXX), this time all the way in the back to their patio stage. When we get there the first thing we all notice… EPIC GINGER! And really when I say epic… he had the most regal, most elegant mane of pure red hair I’d ever seen. Wearing a simple white T-shirt and black jeans, holding on to his bass guitar like an ax-wielding gladiator. 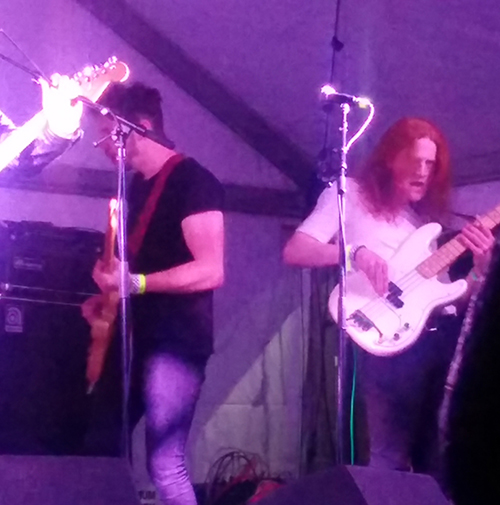 The band goes through a few minutes of warm-up, teasing us with the loudness and fire that’s no doubt a hallmark of their performances. And when the show actually gets started… just… WHAT?!

I first have to comment on the band itself. While they may purport to have no actual visual direction, ever the proponents of all things punk, it’s clear at least tonight the direction they’re going is paying homage to every subgenre falling under the umbrella of “rock.” We have our lead shred n’ screecher in his black leather jacket and pants, long hair loose and whipping about as he attacks his guitar. We’ve got our Dapper Dan character, a long fleece jacket over black slacks and a white button-down playing blissfully on his rhythm guitar (and occasionally tickling the ivories on his stand-up keyboard, of course). There’s our bare-chested demon pounding away in the back like a demon. Then we have our second guitarist, there for the pure love of music, simple black tee and skinny jeans. And, finally, our majestic ginger, absolutely mutilating his bass guitar, mean mug on full display, hair flying, looking for everyone in attendance like his entire head’s on fire! Honestly, it looks like the entire history of rock n’ roll was on display, from the ’50s British Invasion, to Seattle Grunge, to the present style of just putting on whatever’s on the floor and getting down to the business of rocking out. I am 100 percent here for it!

Honestly, this was the maddest showcase I’d been to up to that point. Seriously, even the crowd was on a new level of just over the rainbow! A member of the audience was so keyed up he stomped around the back patio area like a bull waiting to charge… and a he did a few times, pushing through the audience with as mean a grimace on his face as our fire-haired bassist. So much so our lead singer and guitarist had to do a double take. “Christ, for a second I almost shouted, ‘What the fook ya doin’ out there, mate?'” (Okay, so I love his accent. I can’t help it.) 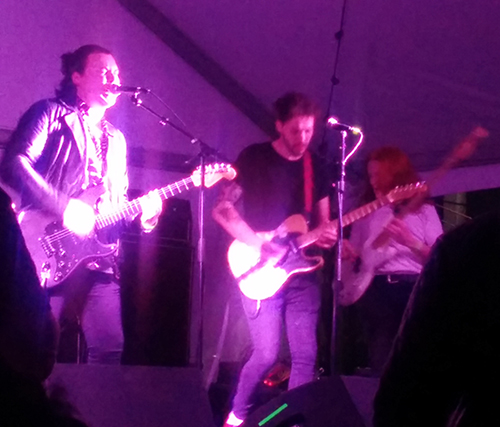 Of course, what we’re really there for is the music. Let me tell you, Fizzy Blood’s sound is just… pure, raw, ugly sex. Like a good, hard fuck after a 5 am bender on a Sunday—well after asking the Lord to forgive you for all your wretched sins. As only a hard rock band from Leeds can and should be. I don’t believe I’ll ever be able to get the pure power of that showcase out of my mind. Standing on wobbly tables, yelling out at the audience, egging them on… yeah, this was a showcase I’m glad we took the time to see even in the chill of the Austin evening.

(All pictures taken with my camera’s phone.)