One of the more exceptional experiences of my time in Austin this year was discovering the beauty of Luna Lee. A little backstory. A few weeks prior to her debut in Austin, Luna Lee’s funding was cut. Apparently the South Korean government thought she was an idol, but upon realizing their error suddenly didn’t have enough money to send her or her band to SXSW. Naturally, a fundraising page was set up for her, and she quite easily met her goal. I’m proud to say I’m one of the people who contributed to her fund. It wasn’t much, but in my mind there’s no reason why an artist who’s been looking forward to showing the world her craft should ever have her dreams crushed.

Making our way to the Driskill was a trial and half. One of our group, I believe it was Jenna, had us following the GPS on her phone. Fine and wonderful. However, it first led us to a hotel that had absolutely nothing to do with our designated venue. We sat in the bar listening to an Australian artist (whose name escapes me, I’m so sorry) for about ten minutes. Meanwhile, the time for Luna to take the stage was slowly approaching. But our Australian Southern folk singer didn’t seem to be ending his set any time soon. We finally walked back out the doors of this lounge area and asked the receptionist if this was the right venue. Of course it wasn’t, so we had to hoof it down the stairs and back out into the crowded street.

The gag is, the actual venue was right across the street from the hotel we accidentally ended up in (major side-eye, GPS). We rushed through the doors and to Victorian Room where Luna’s showcase was being held. We finally made it, breaths coming in ragged pants, and settled in for an experience we’d only seen secondhand via her YouTube videos. Trust me when I say her brilliance must be experienced live.

Her promoter and seemingly biggest fan, Rock Howard, introduces her with as much enthusiasm as any fan of any K-pop idol group I’ve ever seen. His intro proved a perfect foil to the woman herself. Luna’s stage presence is understated, her voice, soft, one could say shy. But when she lays her fingers on the strings of her gayageum and plucks through the first few notes o f a blues-rock melody…. You want to talk about lifted…?! 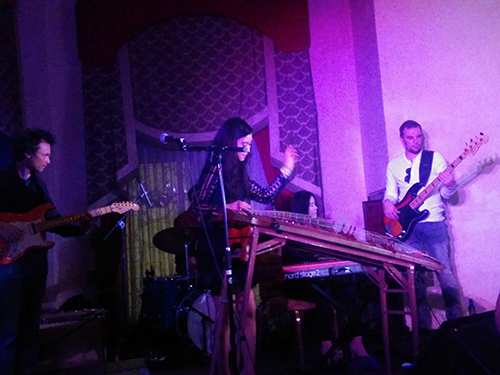 She opens with a track from Led Zeppelin, the heavy rock of the song fitting almost like magic over her strings. As she continues her set, each song representing another part of her love and passion for all things crunchy and raw, every listener in that room is trapped, captured in a spell unlike anything else. Nothing is more intoxicating, not even the cleanest, strongest shot of rum or tequila could match the effortlessness of her rock and sway, the ethereal elevation of her artistry.

When Luna does finally speak, it’s to introduce her band, a group of local musicians she found in the few days preceding her performance: on guitar, Eric, drums is Paul, Bass is Justin, and piano is her own keyboardist Jun-mun, the only member of her band she could bring because of her funding being pulled. In the throes of my own passions, I don’t actually believe this band had only been together for the couple days leading up to her showcase. Their synchronicity is impeccable, a togetherness that comes from years of playing together (well, at least longer than 72 hours). As she plays songs like Comfortably Numb, one of my favorite Pink Floyd masterpieces, I can’t help it. I’m falling in love. The sound is just so… soothing isn’t the right word. But it certainly isn’t jarring or even perplexing. In that moment, I feel as though I’ve been around this instrument all my life. It’s something like meeting someone for the first time, but as soon as you start talking you feel like you’ve found a lifelong friend.

As Luna moves smoothly from rock to more traditional Korean fare, even throwing in tracks from her own discography to showcase just how wide her talent is, she’s completely bewitched us all. There are nothing but sighs, gasps, and moans, as if we’re all being embraced by a loved one. When she plays gayageum, she manages to change the entire makeup of the instrument. It’s traditional when she plays traditional, but she proves how multifaceted the Korean instrument can be. When playing BB King or Muddy Waters, we get the blues guitar. When playing Pink Floyd, we get the snarl of Roger Waters, Hendrix when she gets that psychedelic twine in her soul. And that’s exactly what we get. Luna is playing soul music. No matter the influence or genre, she’s moved by the music she plays, and it shows in the way she can transmogrify her instrument seemingly just by thinking about it. 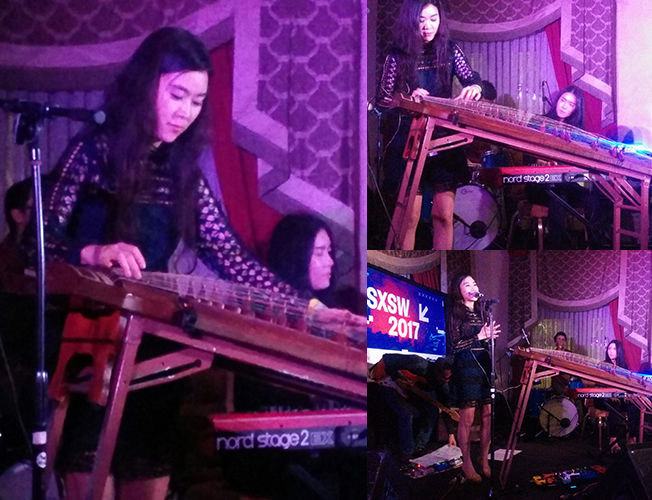 As the night comes to a close I’m reminded of something I’d discovered about one of my favorite artists of all time, Stevie Wonder. The legendary singer, multi-instrumentalist, and songwriter has always been lauded for his musical exceptionalism. However, something magical happens when he wraps his lips around the harmonica. As a young girl, I was truly fascinated by the way he made that instrument sound. It wasn’t just a tinny wail coming from a tiny mouth box. What Stevie manged to do was make that harp sing, literally with a voice and an ache, emotion and power like one of the ladies in Wonderlove, his backing vocals. In this moment, as the last notes of her gayageum trickle and dance through the air, I hear something akin to a woman’s voice, angelic and pure. She, like my favorite musician, has made that instrument sing.

We leave the Driskill utterly shattered and reborn, our entire musical outlook completely shifted. Of all the performances we’ve seen up to this point, for me this had to be the most enriching. This was the perfect way to soothe some of the madness of my SXSW experience. I wish I could’ve floated on the cloud Luna placed us on forever.

(All images taken with my phone’s camera. She works so hard, and I love her!)