If you’ll remember from my write-up about Taiwan Beats, you’ll note that I wasn’t actually able to stay for the entire show. This group is the reason why. XXX is a hip-hop duo out of South Korea that has a bite in their music that’s rather shocking coming from the small country. Not because the hip-hop scene is lacking (South Korea has a rich 20-year history with the genre). The country is very conservative, even with the sudden surge in popularity of hip-hop the last two or three years. As such, artists like rapper Kim Ximya and DJ/producer FRNK are still seen as a rare breed. Having interviewed them earlier that day, I was gifted insight into their creative process and their philosophy on music and hip-hop. I was more than a little intrigued to find out exactly what it is that draws people to their shows. I certainly got my answer when we crossed the street from Elysium to the ScratcHouse. 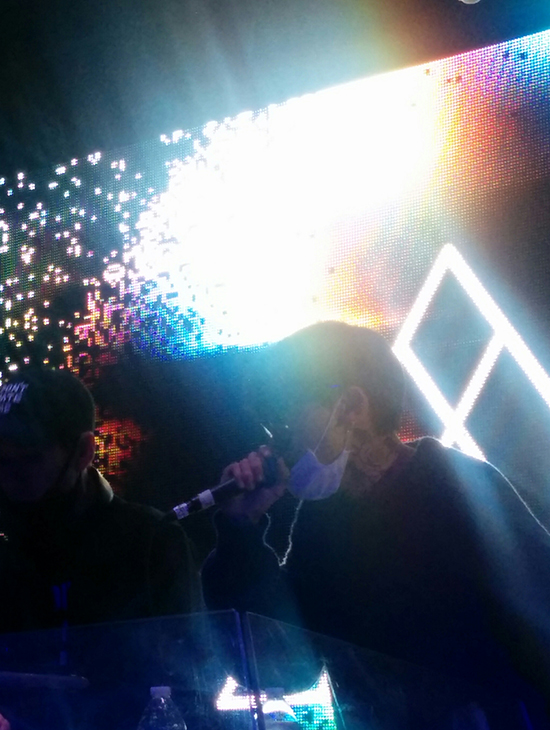 The venue, as many in Austin during SXSW, is combination bar, dance floor, and stage. A huge LCD screen backliights the stage, looping through randomized colors and patterns (think old-school Microsoft Media Player’s visualizer, or maybe the iTunes visualizer). The artist prior to XXX alighting the stage is just finishing his set as we make our way to the front (or as close to the front as we could). Regardless of whether or not people actually know what they were witnessing, the atmosphere is electric, alive with expectant energy. If nothing else, the drinks are plenty, flowing freely, and the combination of alcohol, a crowd of people, and live music equals a hype show no matter who you are.

The group has a small but very dedicated following, some of which happen to be in the audience. One girl in particular is especially excited for the young men as they take to the stage. Even as they’re doing their pre-set prep—checking sound levels for the last time, going through their transitions, etc.—she can’t contain her enthusiasm. She even asks a member of their small entourage if he’s excited… in Korean! This is clearly a woman who knows the group intimately, their music reaching something deep inside of her. She’s certainly no stranger to Korean music or culture. 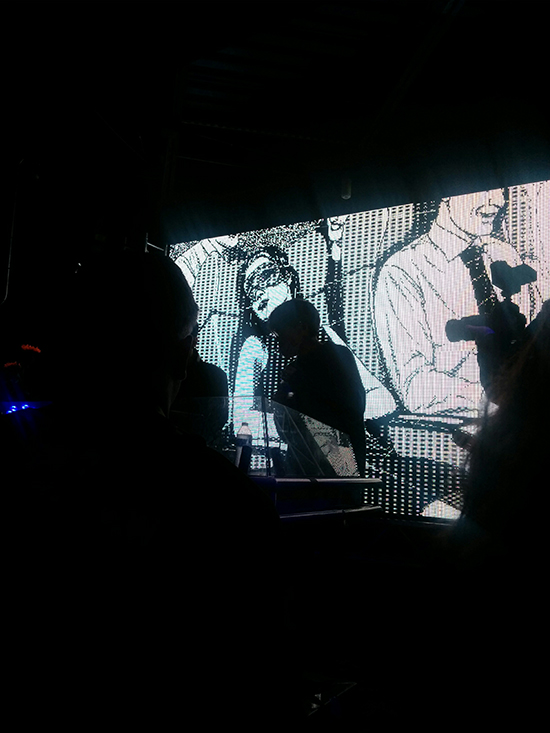 From our conversation, I observed how reserved the two actually are. There’s a great deal of humility in the way they interact with people around them—presumably, as with most, people they don’t know well. While they’re certainly not quiet by any means (especially Ximya), even in their stage performance, there’s a small bit of hesitancy, maybe even holding back. To be clear, Ximya’s voice is strong, and FRNK is fully immersed in spinning, but there’s none of the overt bravado one expects from hip-hop acts.

That being said, the audience is so taken by the space-age warble of the music, the power in Ximya’s voice, they’re instantly sucked in. It’s almost like a black hole, music bending all space and matter to either transport you to another plane of existence or destroy everything you thought you knew to be true. The music is brazen, the images are a bit frightening, intimidating for the uninitiated. But like I said, liquor does a lot to free the senses, and this crowd is certainly uninhibited.

Their loyal fan lets loose a series of whoops and hollers as FRNK smoothly transitions from one song to the next. She nearly bum-rushes the stage when the initial twining creep of Flight Attendant drizzles from between his fingers (though the images behind them are for Liquor). She proclaims in a voice strong enough to draw Ximya’s attention, “Oh shit! This is my song!”

As they begin to settle into their 20-minute set, Ximya, becomes more interactive, asking the audience how they’re doing, if they’re enjoying the show. Even teasing them, asking if they’re having a good time. When the crowd erupts in screams—a few slurred “Hell yeah”s thrown in there for good measure—he says, “Liars!” Of course, the crowd loves this cheeky side of the reserved MC, even flinging a few… shall we say XXX-rated compliments toward the stage. (I’ll just say one audience member makes it clear he wouldn’t mind FRNK stimulating his… sensitive bits with the records he’s spinning… yeah….) 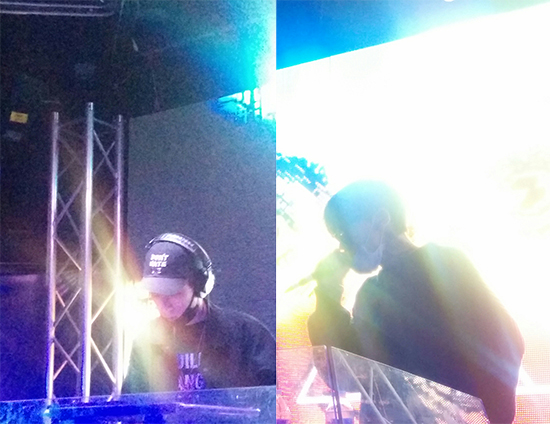 Just as the set starts to get good to the crowd, it’s over. Audience members show them so much love, screams and applause following the duo off stage. As I try to find my way to Jenna Rowe and Rebecca Cronan (the lot of us shifting from Valhalla to ScratcHouse together), there’s a sudden surge to the back. The few fans in attendance and a group of new admirers (so about 80 percent of the crowd in the venue) are rushing to get a glimpse, a picture, a handshake from the duo. I have enough time to chat with their manager again, then give FRNK a smile and a wave as our group navigates through the crowd and out into the cool Austin night. 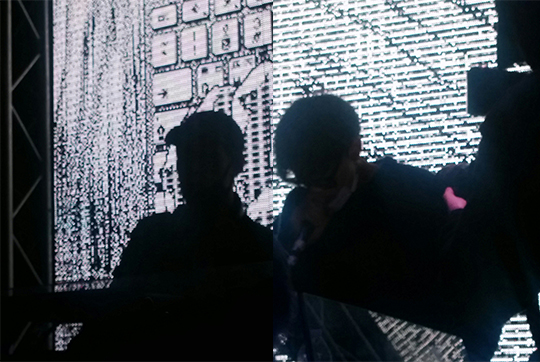 Love them or hate them, Kim Xiyma and FRNK know how well their music translates to a club setting. Even without knowing much about them, the entire audience was transported, a fact I’m sure FRNK, a dedicated fan of Stanley Kubrick, would absolutely revel in.