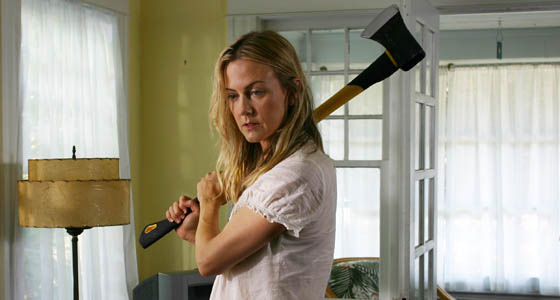 Remember the half-torso walker [1] Rick encountered during The Walking Dead‘s pilot episode? Well, that walker is called Hannah and she’s getting a backstory of her own in The Walking Dead: Torn Apart, a 6-episode web series directed by Greg Nicotero, who also serves as the key special effects makeup supervisor for the AMC series.

Torn Apart follows Hannah (Lilli Birdsell), who is just waking up from a car crash into a world overrun by zombies craving blood and brains. Just when things seem lost for Hannah, her husband Andrew (Rick Otto) saves her and she reunites with her children (Madison Leisle and Griffin Cleveland), who are sheltered at their home.

Of course, knowing the nature of the show and Hannah’s fate, we know that no place is really safe from the walkers.

Torn Apart mostly serves as an appetizer for the second season of the main series, but it also provides insight into what happened at the beginning of the apocalypse and shows how Hannah became a walker. The web series also lives up to its name by amping up the brutality factor through some suitably gory and nasty zombies. I never thought mouth-to-mouth resucitation could end up looking brutally awesome.

However, the characters are a mixed bag. Rick Otto’s Andrew comes across as the weakest character. The actors playing Hannah’s children aren’t good by any means. On the other hand, Hannah is likeable and grounded enough to make the webseries work for the short time it takes to watch — I felt bad for her when her fate was sealed. Rex Linn, best known for playing Frank Tripp on CSI: Miami, does a good job with the role of the neighbor, Palmer, in his single appearance.

The Walking Dead: Torn Apart could have served a better purpose for the television series in terms of getting to know more about the main characters from the television series. Why? Because it’s kind of hard to care about the characters (except Hannah) on the web series. A lack of human interaction knocks the web series down a notch. Also, web series run much longer than 20 minutes nowadays and I would have enjoyed seeing a deeper backstory.

For what it’s worth, Torn Apart remains faithful to the show’s nature and serves as a good setup for one of the most powerful scenes of the first season, involving zombie-Hannah showing some humanity before Rick puts her out of her misery.

Watch The Walking Dead: Torn Apart on AMCtv.com or at huffingtonpost.com