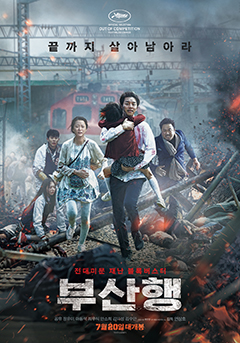 I’m the Ebenezer Scrooge of horror movies; first, I’m a chicken. I usually watch horror films (if I have to) in the day, so I have enough time to unwind, if it gets me. Second, I’m usually not a fan of movies that are set to just make you jump from your seat and then make you laugh uncomfortably because you’re embarrassed you just did that. Third, there’s a lot of stupid decision-making in movies where people need to die *cough*. Last, I’m not into gore, so I also tend to avoid zombie flicks where they get their choncholi and anticucho going.

With that said, I’m the last person you’d expect to tell you that Yeon Sang-Ho train-filled zombie action drama is a good one. Known for his background in animation (with the cult hit The King of Pigs), Yeon first developed his most recent animated flick Seoul Station [Trailer], in which people try to survive a zombie pandemic that’s unleashed in downtown Seoul, when one girl (Shim Eun-kyung, in her Sunny-inspired zombie cameo) enters the KTX inbound for the city of Busan, starting our Train to Busan nightmare.

In here, we follow the life of the little Soo-An (Kim S.A) who, for her birthday, asks her workaholic (and perhaps egotistic) father Seok-Woo (Gong) to take her home to her mom, who’s obviously separated. Being a crappy dad, he gives into his daughter’s wish, only to be stuck in this pandemonium.

What’s great about Train to Busan is that is not merely a cool zombie flick because Koreans ain’t afraid of their melodrama. They own it. Oh, they OWN it. Sometimes they take it to extremes [*cough*Ode to my Father*cough*], at other times they get too real, and sometimes they serve it to you in a way you never expected. But Asians, they set out to make you cry. In here, life and death feels real, sacrifice is heartfelt, making the ride on this train as satisfactory as possible.

However, no film lacks its shortcomings. Throughout this one, I felt this testosterone thing going on— all female characters are either a child, pregnant (Jung), elderly women, or a high school girl (shout out to Wonder Girls’ Sohee!). It’s, at times, exasperating, but works in the story as these women are emotional anchors; while the men, they’re evil or heroic like corpulent Sang-Hwa (Ma) who get to muster his macho strength. Save us, Ma Dong-Seok! I ate it all up, I’m sorry. I was a pile of mush at the 1.30hr mark, when I thought the whole thing should’ve been over, but it continued… and it still surprised me emotionally. I thought I wouldn’t fall for it, but I was still quite hooked to the storyline and its characters to let go.

It was a great zombie adventure!