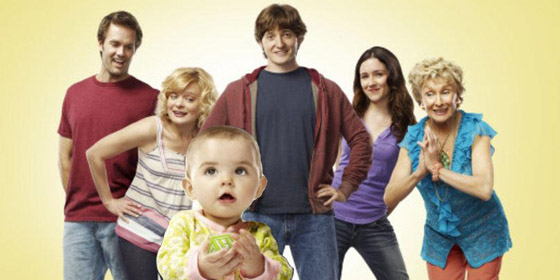 What happens when you ask your son to get you ice cream from the store? He finds a serial killer and sleeps with her, of course! The next morning you have breakfast with her, see her picture on the news, and then you knock her down with the television to give her to the authorities.

Oh, yeah. Months later you find out your son knocked her up, and that she was given the electric chair.

This is how Raising Hope is set up, when Jimmy (Lucas Neff) ends up with Hope — a.k.a. Princess Beyonce — as he finds his new purpose in life… and the new cute girl from the store, Sabrina (Shannon Woodward). Of course, his parents are against it at first, but they’re really the ones to talk! Joker dumb but good-hearted Burt (Garret Dillahunt) and ironic but lacking in vocabulary Virginia (Martha Plimpton) had their son on prom night, and have been blaming him for all their misfortunes in life.

The Chances are a family far from perfect — they lie to each other, they trick each other for fun, they put themselves ahead of others. But despite everything they do to each other, there’s always a family lesson to learn, like all our families. Their misadventures are funny, even though they’re not as continuously hilarious as, let’s say, Modern Family — but it’s still pretty good.

Congratulations to Plimpton and Cloris Leachman for their Emmy nominations for Best Actress in a Comedy and Guest Actress in a Comedy, respectively. I’m glad to hear that Leachman has been bumped from guest actress to a proper supporting role, so I’m expecting a lot of Maw Maw madness in the upcoming season.

Raising Hope has been steadily paced, balancing Jimmy’s time with his family and Sabrina with a little brief appearance by his friends. However, some of the funniest episodes have revolved more around the family than the rest, like in Blue Dots about Burt’s sexual offender record and the Chances trying to get rid off it, or A Germ of a Story in which Sabrina tells Jimmy about the dangers of an unhygienic home.

The only character that irks me regularly is Jimmy himself — since he’s the main character, it seems like a big problem. I know he always comes around from all his whining about his family, but more than 20 episodes of him doing that is just a little too much.

The last episode of the season, Don’t Vote for this Episode, seems like a nice little wrap-up in case the show wasn’t picked up for a second season — which it has been, by the way. Season 2 of Raising Hope will start on Tuesday September 20th at 9:30 pm.