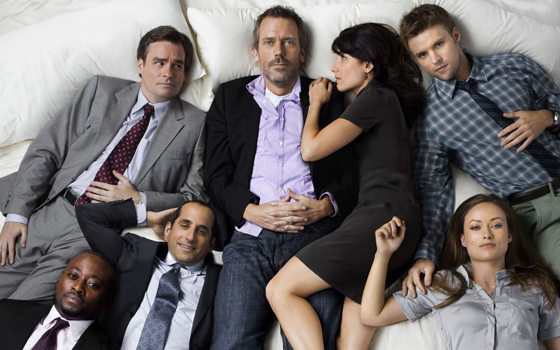 We were wrong about Season 6 of House M.D. NiceHouse isn’t the worst of television… leave that up to EmoHouse, getting hitched, renting monster trucks, jumping off a balcony, and treating himself to experimental drugs not used on humans. Did we mention extracting your own leg tumors in your bathtub? We love JerkHouse, but too much is too much.

Season 7 picks up a while after Cuddy (Edelstein) and House (Laurie) decided to give their relationship a try — in a non-hallucinatory scene. As a surprise, House seems genuinely happy getting it on with the boss, but the scenes seem out of place in the context of the show and we’re often left thinking about the patients and cases.

The show also suffered from Olivia Wilde’s movie career by having her gone most of the season, leaving the role of the female doctor of the team to be filled by a series of other female doctors like Vinessa Shaw, Keiko Agena, and ultimately Amber Tamblyn. Though Shaw was severely underused and Agena’s stint seemed too short-lived — there were a lot of people who liked her character’s no House BS attitude — it was Tamblyn’s gig as the awkward Mary Poppins/Einstein hybrid Masters that irked House so much and made Cuddy hire her.

We won’t deny that House trying to break Masters’ morality was amusing, but having to introduce a character seemed distracting when you already have characters that haven’t been explored, like boring Foreman, who — without his relationship with Thirteen — has been reduced to snarky comments and broody remarks, forever the diddler Taub, who’s been reduced to dry funny comments and situations dealing with his groin, and Chase, who has just been reduced to his groin… and sometimes looks puzzled.

However, the show has had its good run of notable guest stars that include Candice Bergen playing Cuddy’s mother, and patients like Amy Irving, Jennifer Grey, Matthew Lillard, and most notably Oscar nominee Shohreh Aghdashloo (House of Sand and Fog), who deserves better than a weak season finale.

In the end, the show’s latest season didn’t leave us wanting more, except for maybe that feeling of “where do we go from here?”

Notable episodes: Unwritten, You Must Remember This, The Dig