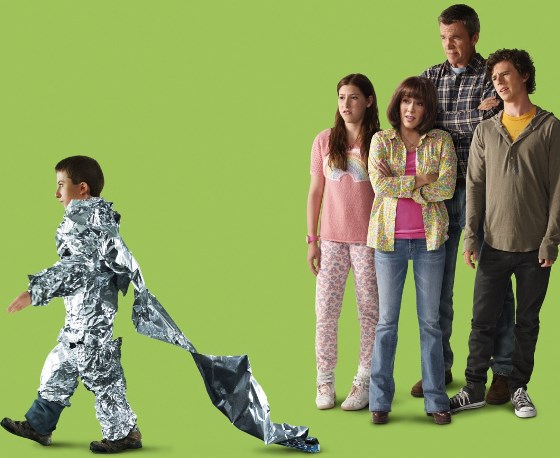 I was thinking about which TV show I wanted to tackle for my 50th TV review. At one point, I considering doing the same as Amy and review a tv show that is no longer on the air. However, I decided to go the opposite route and choose one of my favorite shows that’s still on the air: The Middle. And I’m tackling the first 3 seasons because Season 4 deserves its own separate review and Season 5 is currently airing at the moment. The Middle currently stands out not only because it’s funnier than their more popular fellow ABC show Modern Family, but it’s also one of the few shows that showcases and depicts low/middle class people to a tee and it’s very family-friendly.

The Middle is set in Orson, Indiana and focuses on the Heck family. Frankie (Heaton) and Mike (Flynn) are just two ordinary people trying to raise their three kids in spite of the economy not being friendly towards them. Mike’s a manager at the quarry and Frankie’s a not-so-successful cars saleswoman. They have 3 kids: oldest son Axl (McDermott), an under-motivated and cynical teenager, who does well in sports but not in academics; middle child and daughter Sue (Sher), an enthusiastic young teen, but chronically unsuccessful and socially awkward; and youngest son Brick (Shaffer), an intelligent but introverted compulsive reader with behavioral problems and ongoing quirks… *whispers* ongoing quirks *whispers*.

While the show boasts Patricia Heaton as its biggest star (and series narrator), and she excels well in her role as the devoted mom who deals with the dialy frustrations that comes with her life and family but doesn’t get too annoying unlike her character on the final seasons of Everybody Loves Raymond, it’s the entire Heck family that becomes the main attraction as the series grows out of its good yet uneven first season, which suffered from a slow pacing, feeling less flashier and restricted due to its limited staging, balancing the characters and the economical set-up, and keeping Heaton as the show’s main focus in spite of the rest of the cast being way more interesting to watch.

By the way, it’s inevitable to compare The Middle with Malcolm in the Middle at first sight because of the average family set-up and character similarities (in particular with Axl and Brick). I’ll admit that the Hecks aren’t as crazy as Malcolm’s family, but they’re very fun, good-hearted, quirky and simply pleasing to watch without having to be jerks around each other… okay, Axl has his moments with nearly everyone, but he’s still likeable thanks to McDermott’s comedy timing. And Season 2 and 3 are funnier to watch as the series resembles real-life moments with sharp precision, improved screenwriting and everyone gets their moments to shine, especially when Holiday-themed episodes take place or when cash-related issues pop up.

While The Middle has gotten a good use of its major, minor characters and guest stars, my favorite character is the always enthusiastic yet naive Sue Heck, who always gets ignored by most people and yet the character manages to be both hilarious and endearing thanks to Sher’s energetic performance which also boasts strong physical comedy. She adapts well to everything surrounding Sue, and life gets harsher for her as the series progresses — you know, it comes with being a teenager and all that stuff.

If you’re looking for a show that you want to hang around with its characters constantly, The Middle might do the trick. It’s admirable how they go through so much and yet they never lose hope.