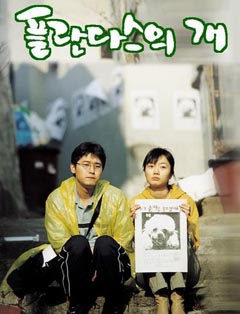 Warning, if you are a vegetarian, frown upon other cultures for having the ideas of eating other things besides chicken, or you’re just simply a puppy lover — asking you to laugh with this movie may be a little too much from me. Even I had to get a little used to, and I don’t even like animals all that much.

Bong Joon-ho’s debut was a dark… DARK dramedy about Average Joe Yun-ju (Lee) who lives in an apartment complex with his pretty pregnant wife Eun-sil (Ho-jung Kim). On a very uneventful day, he finds this dog whom he guesses had been nagging him with his barking, driving Yun-ju mad… so what does he do? Of course he decides to get rid of the poor doggy.

After being unable to strangle the dog, or drop him from the top floor of the building, he goes off to the basement to lock the dog there leaving him to die… only to find out it wasn’t the right dog! When he gets the right noisy dog and does get rid of him, a case of mysterious dog disappearances for the residents of the building begins.

Then there’s Hyun-nam (Bae) an average girl with a less than average job, who hangs out with her average toy-selling best pal. Looking for a way to do something that will get her on the daily news, like the lady who stopped a robber, Hyun-nam sets out to catch the person who’s making all the dogs go missing.

Barking Dogs Never Bite is simply a story about unremarkable people trying to achieve remarkable things. Both our leads have dreams, whether we believe that they can achieve their goals or not is another story, but both want to do something else besides what they are currently doing.

Yun-ju is a qualified teacher who doesn’t get the job he so desperately wants because he’s not willing to play the social game. It’s such a common situation that all of us can easily connect to him, he’s supposed to be unhappy because he doesn’t have what he thinks he needs. His pregnant wife supports him financially, in exchange of a little verbal and psychological abuse — it turns out she also has her own set of issues.

It’s interesting to note that all the characters that seemed to want something more out of life do get what they wanted, but in contrast to the hidden wildcard that lives in the basement, none of the characters end up truly happy. Is Barking Dogs Never Bite a truly depressing film masked under all those funny moments about death and chasing after a culprit? Perhaps, after all Bong Joon-ho’s work is known to be more than just single-layered films… The Host is more than just a monster flick.