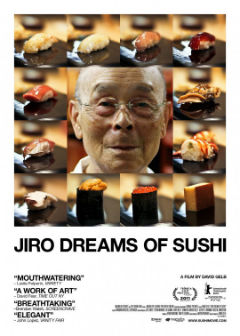 The inspirational documentary that stayed in theaters for nearly a year,  Jiro Dreams of Sushi, takes a look at master sushi chef Jiro Ono, who at 85 years old continues to operate and work as head chef at his renowned  Michelin 3-Star sushi restaurant Sukiyabashi Jiro in Japan.

The documentary not only takes a look at the current state of Jiro’s restaurant, but also looks at his humble origins. It’s easy to see why Jiro has the strong work ethic that he has; he’s been working since he was about six years old — that’s eighty years — and he doesn’t seem to plan on letting up any time soon.

According to his sons — the younger of which owns his own restaurant and the older of which works as his right-hand man — the only time Jiro ever took a full day off work at the restaurant was when he had a heart attack, and this was when he was about seventy years old.

The documentary explores everything from how fish is selected for the restaurant, to how it is prepared, to how it is eaten — one piece at a time. The cinematography, also by David Gelb, is lush and beautiful, turning even the least experienced person into a novice foodie.

What is so inspiring about the film is Jiro’s dedication to his craft. He proclaims that if you are going to do something, if you are going to dedicate your life to something, you better practice until you cannot get any better — and you will always have room for improvement; there is no such thing as perfection. His philosophies about work and art can be applied to pretty much any occupation under the sun; it’s impossible not to learn something from this man.

Foodies, artists, writers, any and everyone will more than likely be charmed by Jiro and his extraordinary, yet also perfectly ordinary, passion for living well and working hard at what you love.