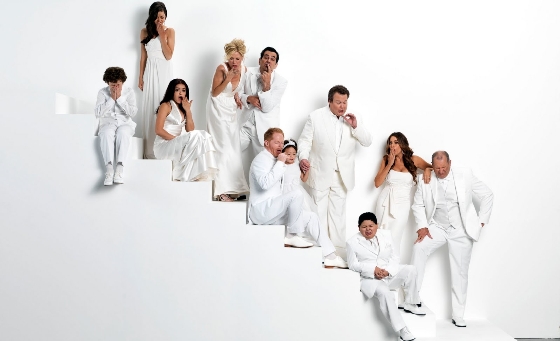 Season 4 of Modern Family is currently airing, but I just recently managed to sit through Season 3.

Back when ABC premiered the first season, the show used the mockumentary format very well and ended up being legitimately hilarious, entertaining and boasted characters that were enjoyable to watch. Season 2 was a step below quality-wise, but it still managed to be very entertaining thanks to the cast improving on their acting. On the other hand, Season 3 can still bring the laughs, but it isn’t all that great… sadly.

Unlike the past two seasons, which didn’t present real storylines for anyone except Mitchell (Ferguson) and Cameron (Stonestreet), Season 3 actually features ongoing storylines for the Dunphys, and that’s understandable, considering Season 2 landed Emmy Awards for both Ty Burrell and Julie Bowen, who play as the Dunphy parents. While Claire (Bowen) tries to win a local election against a city councilman (David Cross), Phil (Burrell) is starting to suffer problems in his salesman job, Haley (Sarah Hyland) tries to get into college and Alex (Ariel Winter) deals with a long-distance relationship.

While the rest of the characters remain the same as usual, Cam and Mitchell are trying to adopt a second child. However, they now find themselves raising an older Lily (Aubrey Anderson-Emmons, replacing twin sisters Ella and Jaden Hiller), who actually speaks and brings her adoptive parents differing amounts of joy and headaches at the same time.

Modern Family has an undeniably talented cast — Ty Burrell, Ed O’Neill, Julie Bowen and Jesse Tyler Ferguson are still great to watch. The show’s kids cast continue to show improvements (Nolan Gould as Dylan is the best among them), but it’s noticeable that Sarah Hyland, who I thought was the show’s weakest link, improved her acting and became a lot more watchable. However, Season 3’s biggest problem lay in the uneven screenwriting, which leads to the inevitable feeling that the show is simply coasting around on its massive success.

Season 2 may have repeated some of the same jokes and stories from the very successful first season, but it still managed to feel entertaining and funny thanks to the cast’s acting, something that can’t be said for the majority of Season 3, which feels pretty repetitive. Modern Family not only feels lazy, but the screenwriting takes a toll on its characters, especially the likes of Cam, Mitchell and Gloria (Vergara), despite the latter being established as a semi-one-trick-pony from the beginning of the series.

Season 3, despite not being as great or creative as the first two seasons were, gains some momentum near the end of the season, as we get to see some nice resolutions to the storylines involving Claire and Haley as well as watching the conclusion to Cam and Mitchell’s adoption quest. The season finale sets up a huge cliffhanger involving Gloria, which should carry into Season 4. At any rate, I hope Season 4 leads the show back into its former glory. The chances of that happening seem unlikely as long as Modern Family continues to win awards. If it ain’t broke, don’t fix it, right?

But let’s be real: Modern Family, while still being capable of bringing laughs thanks to its cast, is no longer the best comedy show out there; seriously, it’s not even the best comedy ABC has to offer at the moment [see: The Middle, Suburgatory, Don’t Trust the Bitch in Apartment 23].