Seeking a Friend For the End of the World 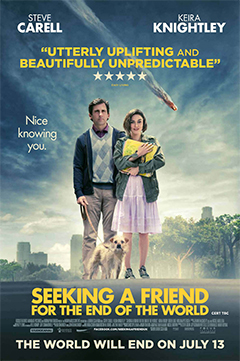 With yet another rumored apocalypse on our heels, it’s no surprise that the end of the world genre is still exploding, and Lorene Scafaria’s Seeking a Friend For the End of the World is just another average addition to the mix.

The world is coming to an end soon and everyone knows it. Wives are running away and husbands are discovering past loves, and that’s exactly what happens to Dodge (Carell). When his neighbor Penny (Knightley) gives him some old mail, the two set off on a road trip to find the right place for themselves. For him, it’s with his high school sweetheart. For her, it’s with her family across the ocean.

A far cry from last year’s Melancholia, which also focused on few characters and involved some sort of space related apocalypse, there’s not really all that much to care about in Seeking a Friend For the End of the World. The way it handles comedy and drama is pretty uneven, and every laugh it delivers brings a boring moment right after.

The journey the two go through is enjoyable enough, albeit an extremely predictable one. It’s a romantic comedy with dramatic undertones that follows a story told time and time again, and even the end of the world can’t do anything to change that. Lorene Scafaria’s writing leaves a lot to be desired from the film, but at the very least it’s full of fun actors like Rob Corddry, Connie Britton, Patton Oswalt, Martin Sheen, and Gillian Jacobs in small roles that help the time pass by.

Carell’s performance is serviceable enough to his simple role, but the emotional depths the film tried to reach were nonexistent and his character is a testament to that. No matter how impressive her work in Anna Karenina was this year, Knightley is trapped in a terrible corner here. Her character is your usual manic pixie dream girl and the act is as tired as her obsession with records even though she doesn’t have a record player.

With the world ending, everything isn’t all fun games, but Scafaria’s debut feature seems to think it is. All in all, Seeking a Friend For the End of the World is a little too quirky for its own good.