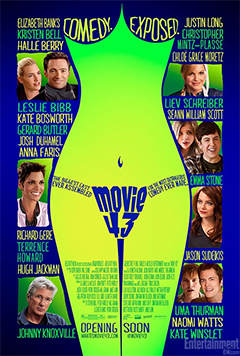 Sometimes it’s hard to tell when a film is going to be a steaming pile of shit. Other times, it’s painfully obvious. When you have real life couple Anna Faris and Chris Pratt, two very entertaining people, starring in a short within an anthology flick in which they quite literally talk about shitting (or should I say pooping, the film’s choice of romantic terminology) on each other, it’s one of those painfully obvious experiences. This is only one piece of the shameful Movie 43.

An anthology film of catastrophic proportions, Movie 43 is framed in two different manners depending on which version you’ve got your hands on. One, which I have not seen, features Dennis Quaid plays an insane screenwriter pitching ideas to an executive played by Greg Kinnear. This actually somehow sounds amusing compared to the trash I was treated to, which threaded all the shorts together to a narrative about two idiot teens tricking a kid into looking for a fake movie that turns out to be real. There’s more to it, but it doesn’t really matter.

There is absolutely no thematic continuity throughout the shorts, unless you consider embodying all that is Not Funny a theme, and some of them are actually split into two parts which means you’re subject to them more than once. The first short alone already introduces us to how bad it can get by having CGI balls on Hugh Jackman’s neck. If someone cut it down to Kate Winslet just making disgusted faces, without a single frame of Hugh Jackman’s neck balls, it might actually be funny, but it’s not. It’s really not. Right after this Naomi Watts and Liev Schreiber play a deranged couple that subject their son to a “full high school experience” which involves beating him up and making incestuous sexual advances towards him. You may be wondering, “Well how is this funny?” Surprise: it’s not.

“But Juan this doesn’t sound that bad?” Well kids, I haven’t told you about the short that’s one big joke about a teen girl getting her period. Or the other period joke that involves a shark eating a woman. Hilarious. Or that time they tried to joke about iPod’s with iBabe, which is literally a naked white woman that plays music. Or that time Richard Gere pretended to finger a fully nude woman of color who is also an electronic device after delivering the punchline, “Finally, we can give our customers a choice of color.” Haha. Racism and female objectification all in one package, punctuated by a woman saying, “Just when I thought it couldn’t get more offensive.” I see your self-awareness Movie 43 writers. This doesn’t make your piece of shit movie any less terrible.

Not shockingly enough, one of the shorts is less terrible than the combined terribleness of the rest, but still overwhelmingly awkward and poorly written. It stars Emma Stone and Keiran Culkin and was strangely directed by Griffin Dunne. Maybe it’s just something about the two of them that I like, or just that they have chemistry and deserve an infinitely better screenplay than this, but it’s still a shame to see step down to this level. It’s actually a shame to see all of the actors in this movie step down to this low of a level, but maybe that’s why they’ve all practically disowned it. As aimless, racist, and sexist as it all gets, and believe me I’ve left out some of the other terrible shorts, all of these people somehow agreed to help with the project.

I could bitch and moan about Movie 43 for decades, but I’ll let someone else sum up the film for you in a way that will allow you to simply skip it. Here is the quote by Jeff Goldblum (who thankfully did not appear in this movie) that I will now and forever attribute to Movie 43.