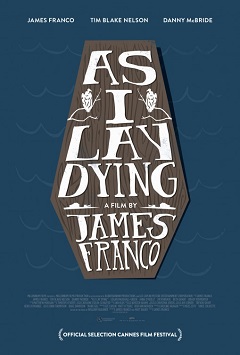 I haven’t read William Faulkner’s novel before watching James Franco’s book-to-film adaptation, but I have read online that Faulkner’s novel is very difficult to adapt to the screen. Somehow, Franco has tried to do what many have considered impossible to pull off. The end result is not a bad film, but it’s tough to watch given its content and direction.

Anyways, As I Lay Dying follows the Bundren family — toothless father Anse (Nelson) and his wife Addie (Grant), parents of Cash (Parrack), Jewel (Marshall-Green), Darl (Franco), Dewey (O’Reilly) and Vardaman (Permenter) — whom are your typical rural USA family living in Mississippi. The family are shown at the beginning dealing in their own ways with Addie on the verge of death.

When Addie dies, the family attempts to honour her last wish for a burial in her far-off hometown of Jefferson, Mississippi. Given the story’s rural settings, the trip requires transporting Addie’s body inside a homemade coffin with a horse-driven cart. Needless to say, this is not an easy thing to do for Addie’s family, especially when complications arises during the trip which clashes against how everyone copes with death individually.

The premise of a film about how a family deals with the death of a beloved member is interesting and obviously grim, but James Franco’s take on the story is quite a mixed bag. I cannot deny that As I Lay Dying boasts pretty good photography and good acting, especially from Tim Blake Nelson. Also, it was a bit surprising to see Danny McBride going against type despite his few minutes of screentime. Where the film suffers, however, has to do with Franco’s directing skills, most notably with the choice of using split screens very often.

The way Franco used the split screens came across as quite artsy for the sake of being artsy. I understand the choice of doing it in a way to enhance the story, but it wasn’t necessary to have the split screens most of the time — especially when both screens shows the same thing — and this made at least the first half of the film pretty tiring to watch, not to mention the pre-death scenes being boring to watch for the most part (the film improves with the road trip, thankfully). Although I’ll admit that the best use of the split screen (and the most useful of them all) involved Addie in a flashback scene when she reveals the truth about Jewel because it enhances the importance of Addie to the story big time and it’s one of the film’s highlights.

I didn’t hate the film because watching the family go through such a journey that ends up with different sacrifices happening to them wasn’t that tedious by the end of the story. And from what the film displayed, the novel seems pretty difficult to adapt to the big screen considering that we have many narrators telling their side of the story. Still, I think As I Lay Dying could have used someone else for directing the film instead of Franco.