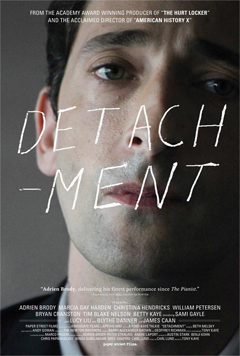 Tony Kaye has been pretty out of the picture since American History X, and after all the controversy that surrounded the movie, it’s not that surprising. While he’s worked on a few projects between then and now, he’s finally back with a bang of a film named Detachment.

The film follows three weeks in the lives of several high school teachers, administrators and students — most importantly of these is substitute teacher, Henry Barthes. During his time at this school, he interacts with those around him, including a young prostitute named Erika that Henry takes in, attempting to keep his distance. With each person he meets, Henry begins to lose his composure, finding the detached lifestyle he’s grown accustomed to unraveling little by little.

Most movies about the education system pretty much make everything about a savior teacher. Take for instance Dead Poets Society, Stand and Deliver, Freedom Writers, and even School of Rock. The issue is that each of these films tries too hard to focus on the education system rather than on people themselves, and they’re usually predictable and happy.

Whether or not you’ve been placed into a public school system where no one really seems to care and the few who do are just being drowned in how futile their attempts seem to be, you can understand exactly what this film is going for. It’s a reminder that even when you try your hardest, there’s an enormous chance that things won’t work out the way you expect. There’s always some hope, but trying to hang on to that hope is the hardest thing to do.

Brody’s performance as Barthes is spectacular; clearly the best work he’s done since The Pianist. The way he interprets this character and brings out the darkness within him is impressive and I wouldn’t be surprised to see him snagging a Best Actor nomination this year (assuming this film even gets the recognition it deserves).

The supporting cast of school faculty is as colorful as can be, showing off the skills of Lucy Liu, Marcia Gay Harden, Christina Hendricks, Blythe Danner, and James Caan in small and simple segments that one wishes were expanded further. The two that surprise the most here are Caan and Liu — one with dark humor and the other with an intense breakdown. Even Bryan Cranston stands out in his two minutes of screen time.

For a first time screenplay by Carl Lund, one doesn’t expect something that goes as deep as Detachment does. It’s gritty, it’s real, and I’d even go as far as to say it deserves a longer runtime — maybe even an HBO miniseries to further develop these intriguing characters.

The blending of a documentary style and a straightforward film works out well. You can see how Tony Kaye is further developing his own style with Detachment, drawing from his past work in American History X and Lake of Fire.