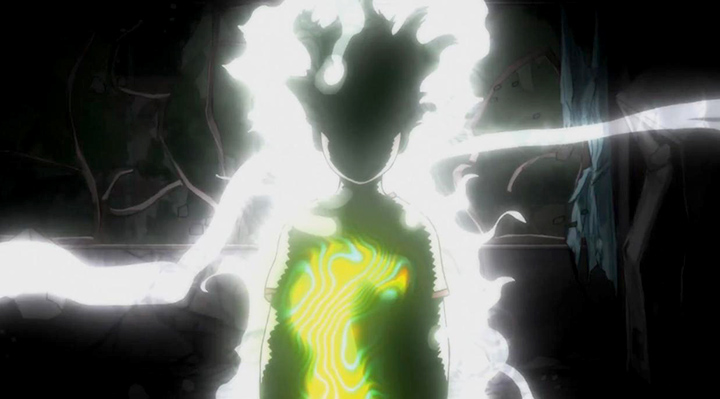 I love animation, so it’s always amazing to find an animated series that takes advantage of its medium. Masaaki Yuasa does it all the time, and so do Yuzuru Tachikawa and Kenichi Fujisawa on Mob Psycho 100; a series based on the web manga of the same name. Even the intro to the show is a treat to watch.

The show follows the life of Shigeo Kageyama (voiced by Setsuo Itou), known as Mob, an 8th grader with psychic powers (known as Esper abilities) that developed at a very young age. Choosing to suppress his powers for the danger they represent, he tries to learn to deal with them as he begins working under the wing of Arataka Reigen (Takahiro Sakurai), a psychic who’s actually a con artist who exploits Mob’s powers by making money off exorcisms.

Mob’s control over his powers are connected with his inner feelings, so when he hits that “100” spot, his powers become uncontrollable. The kid, however, only wants to live a normal boring life, but people just won’t let him.

Psychic abilities, spirits and over the top inter-school rivalries are exactly the perfect setting for some very creative animation, an it helps that the story builds up for the final showdown between Mob and the conspiratorial society known as Claw, who -of course- are a powerful organization looking for world domination. Though I must admit that the storyline takes over out of nowhere, we were just dealing with Mob’s rivalry with Teruki Hanazawa (Yoshitsugu Matsuoka), a handsome guy with Esper abilities; as well as Mob’s younger brother Ritsu (Miyu Irino), who begrudges his elder brother’s powers— which is the best character conflict in the whole series; and turns into a psychic Bruce Lee’s Game of Death-like adventure.

The animation is really mind-blowing, though. Short enough, so the story doesn’t become overbearing; and agile to keep you on your toes.

A second season of the anime is expected [1]~

You can catch the original animated series available on CrunchyRoll. There’s also a TV Tokyo live-action adaptation that is available on Netflix. I haven’t seen it, but I doubt it’ll be able to top whatever can be achieved in animation form. ;P

Annoying purist may be speaking. lol