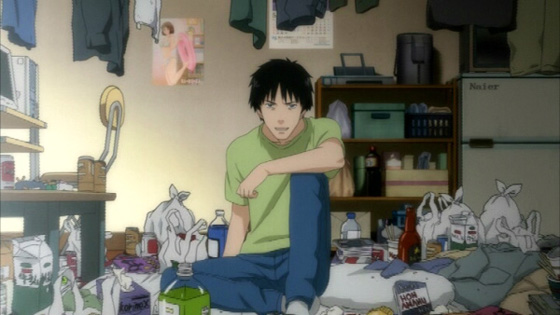 Based on the novel and the manga series of the same name, Welcome to the N.H.K. [which stands for most part of the series for Nihon Hikikomori Kyoukai, or The Japanese Hikikomori Association] tells the story of a Hikikomori called Satou Tatsuhiro, a 20-something-year-old University drop-out who’s been living like a Hikikomori for almost four years of his life until an 18-year-old (?) girl named Misaki decides to take him on as a project and make Satou better his social condition… as well as help herself.

During the 24 20-minute [without opening and closing credits] episodes, we deal with a lot of what we’ve come to know as inherently Japanese odd behavior [though it’s really a global issue], including what we’ve learned to call the Japanese sub-culture of Otakus… Lolicon, video game culture, etc., etc. However, we also deal with serious issues such as isolation, suicide and abuse – the last two often being taboo topics in Asia and Latin America.

This animated series is what makes Japanese animation so avant-garde, in my opinion. Televised animation has hardly anything in its favor. They can’t ever boast on how great their graphics are because they need to restrict their resources so they fit the budget. Ultimately, animation as a medium is seen by many in America and, to a lesser extent, in Europe as a kiddie’s hobby. If the people often put animated films and series down just because of  being animated could give Welcome to the NHK a chance, they’ll understand it better.

Watching Satou-kun dealing with his identity is hardly child’s play. We get to see his situation as a social shut-in [what makes a Hikikomori different to a social shut-in?], his indifference growing up, and the overall detachment from everything around him. On the road to opening himself up to the world, Satou ends up befriending an old acquaintance  from high school years who is younger than him, and who happens to be an Otaku… or more aptly put, a Lolita-lover who likes gaming. This developing relationship, which is really a step forward out of the Hikikomori life, leads Satou into Eroge [erotic gaming], which also leads him toMMORPG… which leads into a more Hikikomori life. Not only ALL of that, he also must deal with the unfinished sexual tensions between him and his senior female high school mate, who ends up dragging him into an unwanted suicide meeting. Moreover, a shady business proposition dealing with Multi-Level Marketing threatens to worsen his living conditions.

ALL OF THAT along with being self-conscious. So no matter what Satou does, he’s always over-thinking, which makes his non-problems worse. Lucky for him, there’s Misato… who, well… has her own demons to deal with.