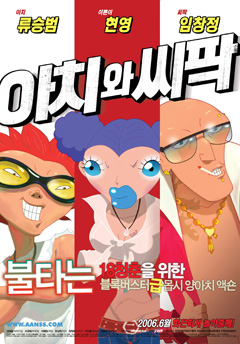 Imagine a world where Klasky Csupo (where wonky character design resides) meets the near lawlessness violence of Tekkonkinkreet. You get this (literally) poop-fest sci-fi action animation set in a dystopian society where the global economy has broken down, the cities collapsed and our common energy sources have dramatically been reduce to the point that we’ve turned our attention to human feces as a source… poop as an economic tool.

After these many years, sounds like a feasible future to me [1]!

It is a citizen’s duty to sit on a toilet as much as possible as, via an anally inserted ID ring, the government monitors your ‘output’ and rewards people with the highly addictive juicybars, which in turn slowly makes you more and more constipated, turning you into an unable-to-poo shrunken blue mutant, in charge of wrecking havoc.

Tired of the suppression and led by a dreadlocked blue monster known as the Diaper King (Shin), the mutants are prepping a juicybar fraud with the abduction of the big-blue-eyed Beautiful (Hyun), when they discover the loophole (no pun intended) to the energy system. In the midst of it all, there’s Aachi (Ryoo) and Ssipak (Im), two hooligans who spend their days riding their motorbikes and mugging people at public toilets.

While I wouldn’t exactly recommend Aachi & Ssipak to everyone because there’s a LOT of (dark) toilet comedy humor, considering the whole plot revolves around defecation — there’s also a bit of sex and indiscriminate amounts of swearing and violence — if you can get around it and/or get used to it easily, you’ll find yourself pleasantly surprised at how radical the animation and story style are. There’s unusual character design, while the blue mutants reminded me of a cross between the Kodama spirits [1] in Princess Mononoke with the Welcome to the N.H.K personification of doom [1][2], I kept thinking that if the makers of the movie wanted to try to recoup their budget, they could cast G-Dragon as the live-action version of Aachi.

Overall, though highly entertaining, I’m still not sure what Aachi & Ssipak is trying to tell me, especially in its third act. I also didn’t like Beautiful as a character nor the big-eyed blonde schoolgirl badass b!tch boss, or Aachi nor Ssipak on their own. However, there’s just something fresh about its rawness and its anti-establishment sentiment that you can’t help but keep on looking at it.