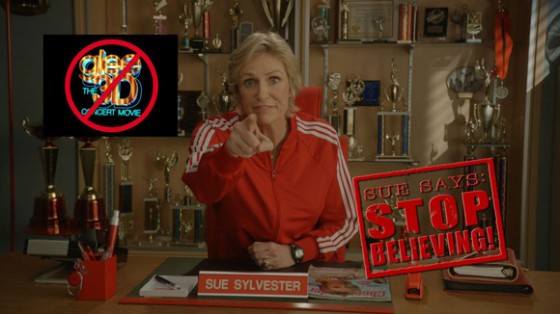 Where Glee is concerned, as far as the music scene, it’s harmless.

I had a very complicated post brewing in my head about pop music and how Kpop is really the thing to watch right now, but nothing came of it. I still think that part of the success Glee has had since its debut has a lot to do with the actual state of the American pop scene — I say American because it’s mostly English-speaking countries that have been overtaken with Glee-fever, as I see nothing of the like in Latin America.

One of the things that most surprised me about Glee: The 3D Concert Movie, though, was the variety of people that were actually singing along. Sure, the success of the “group” is based on the success of the songs they cover, but even I hum to Katy Perry because of the show — I don’t appreciate that, Glee. Not at all.

You gotta admit, there’s just something really charming about seeing parents and their kids singing along to the same music. I do with my dad. My dad and I watched Glee for the first two seasons, and he kept talking to me about the music. My mother watched an episode here and there, and even she admitted that “these kids” at least could sing. Watching or listening to anything Glee is a family activity, and there’s nothing really wrong with that.

And that little Asian kid dressed up as a Warblers — over-sized tie and all — singing to Teenage Dream and Raise your Glass was all sorts of cute.

Glee: The 3D Concert Movie is really not a concert movie. As far as the 3D goes, it’s pointless and it’s understandable people didn’t pay for it. The 3D tag here is WORTHLESS. Not even as an alternative to watching the concert live. The movie would have been received better if you didn’t have to pay for the over-priced ticket.

The Gleeks are all in character. Though I’m not entirely sure how that fits within the Gleeverse, it makes for slightly awkward viewing when they try to be funny — it’s not. The movie turns out a bit self-congratulatory too, as the concert overlaid some of the stories about fans who had to “come out of their shells” and found the strength to do so after their lives exploded with Glee. There’s nothing wrong with that, of course — it provides some depth to an otherwise rather superfluous concert/documentary-type movie.

But what is it, Glee?

Is it money you’re after? Or is it the chance to be meaningful?

I haven’t been watching the third season, so I have no idea what is going on with the show. However, the lack of spark is palpable. People don’t love the show like they used to — the spark has fizzled as quickly as it started burning. People are tired of it. Frak, I’m tired of it.

People aren’t going to pay for a 3D ticket to watch other fans talks about their favorite characters and their meaningful life stories. They pay full price because they want to see the freaking concert in 3D because they didn’t get to see it live. And if you saw it live, why would you pay to watch that crappy 3D version anyway???

As much as people find Sue Sylvester annoying by now, you gotta admit that she is almost always right. Who needs to watch or rent Glee: The 3D Concert Movie when you can wait for it on cable… with no 3D… for free?