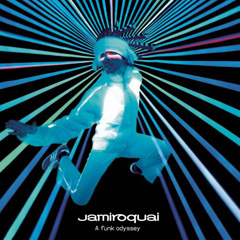 Every great artist has its underrated album. Often times these albums are also their most introspective and brazenly personal. Having experienced unconscionable success with their commercial and critical blockbuster Travelling Without Moving, Jamiroquai found itself in a unique situation.

Their mercurial leader still wrestling with past demons and new, a floundering relationship, and the weight of expectation from himself, his band, and their fans, A Funk Odyssey became so much more than just a means to explore new sonic dimensions. It became a dark narrative exposing Jay Kay’s temperamental sometimes self-destructive struggle (and inability) to find some semblance of balance and control in his ever-tilting universe.

With a nod to 2001: A Space Odyssey, the album is indeed a cosmic affair, delving more into the electropop that began to spring up at the tail-end of the 20th century as the 2000s shifted music from purely live instrumentation to digital experimentation. Opening with Kay introducing his “brother Moon, Mars, Jupiter, and the outer galaxies” and sprinkling stardust on the keyboard, Feels so good illustrates Kay’s state of mind at the beginning of this album — the Space Cowboy has found new ways to teleport that far outclass his leafy weapon of choice.

A Funk Odyssey then reveals what can only be a loose chronology of Kay’s pharmaceutical exploration of the cosmos. He first delves into his tumultuous relationship with model/actress Denise Van Outen, a highly publicized affair that was as passionate as anything Kay had experienced while being marred by the progression of Kay’s dependence on other means to drift away, causing the two to split (Little L).

Just when things become a bit crazy, we find a more acoustic oasis in the middle of the digital desert. Corner of the earth is a glorious tune that highlights Kay’s desire to find some stability. However, it’s impossible to remain sheltered in one’s own sanctuary. Stop don’t panic and Twenty zero one put harsh tones to a smooth electro base, illustrating the punch and sparkle of Kay’s life. We see him at his darkest in songs Black crow and Main vein — the former giving form to his melancholy (complete with acoustic guitar, poetically introspective lyrics, and haunting backing vocals), the latter allowing the man to lash out: “What you gonna do to stop me this time, baby?” (With explosive vocals from British soul diva Beverley Knight.)

A Funk Odyssey comes full circle with Picture of my life, the album’s most poignant track. This is a man so trapped in his pain he contemplates the real meaning of himself and his role in the grander scheme of life: “Who will mind if I just disappear?” Then, his soul cleansed of its pain, the darkness subsides and after a time of silence, Kay emerges with a newfound love for life, proclaiming, “I woke up today by the sound of singing birds. / It feels so good just to feel.”

A Funk Odyssey proved not only to be the band’s most personal album, but one that brought frontman and founder Jay Kay from the brink of crippling depression and self-destruction. It was an awakening both personally and musically. While managing to push the band and its music to a new musical perspective, Kay also found a way to push himself to create a new arc of positivity around him. It’s shamelessly self-centered and indulgent, an album that’s more for himself than anyone else. But it’s this openness that marks it as one of Jamiroquai’s most underrated yet narratively complete works to date.

You can listen to A Funk Odyssey on Xiami and Spotify. You can buy it on iTunes and Amazon (CD, MP3).