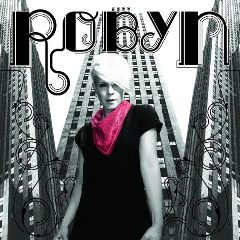 Since 1994’s Robyn Is Here I’ve pretty much been a massive fan of this Swedish firecracker. I missed her voice on mainstream radio in the US after her American debut. Her quirky range and Euro-grit was really something the R&B/pop music scene hadn’t seen, even in the cornucopia of art and craziness that came out of the 90s.

With her self-titled album, Robyn brought back her unique brand of pop music. She introduces herself like a queen, complete with a herald who extols her most ridiculous accolades and accomplishments (Curriculum Vitae). Then she says hello and presents you with her sharp tongue and the kind of tongue-in-cheek humor you should expect from her and her record label (Konichiwa Bitches).

The beginning of Robyn is like playing a video game, going from level to level until you meet both the boss and the queen, Robyn playing both roles and daring you to take her down while still wanting you to save her. She goads you into trying to reassert yourself, almost as if she’s daring you to bring your and your crew’s best to take her on (Handle Me, Bum Like You). This persistence is enough to keep listeners invested in the album until they can break through her hard core, revealing the softness that we see as the album progresses.

Robyn is severely sarcastic, a cheeky little vixen with a sharp tongue and even sharper wit. However, the album is more than just a piss-take on the so-called machismo part in parcel with most crotch-grabbing, swag-slinging men in the industry. Her voice gives softness to the brazenness of the album’s personality — making lyrics like “I should’ve seen it coming. I should’ve fucking known” (Should Have Known) seem soft and poetic. She openly admits she’s not what people may want or expect, and she’s very proud of that fact (Who’s That Girl).

The music showcases that pride, being at once syncopated and guttural, then blissfully gorgeous. She took a chance with the music, defying the industry to release sounds and beats that were multilayered and opened the door for such diversity and nuance to become the norm in pop music. However, what most of her successors have failed to do with the electro-pop sound, Robyn succeeded in making music that while relying heavily on computer-generated beats was completely emotional and didn’t overshadow the sweetness of the vocal or the honesty in the lyrics.

There’s a reason why Robyn decided to give the album her name. It’s definitely the most brazen she’d been up to that point. It’s completely and absolutely her: fierce, unafraid, strong. Vocally, she stretches the imagination, giving each listener something new and fascinating to grasp onto. Lyrically, she’s brazen, unabashed. Her lyrics speak of freedom of self, possession of one’s own core, and ownership of one’s vulnerability. Robyn stood out in the early 2000s as an album that seemed to take a sledgehammer to the pop we were used to on the radio. Instead what we got was the sonic extremes we were used to in the 90s — the beats are heavier, the romance is softer and closer to the skin. Truly, Robyn is a musical powerhouse and her self-titled fourth album brought that truth to the forefront in explosive fashion.

You can listen to album on Xiami and Spotify (the Spotify version includes bonus tracks released in 2008). You can buy the album on Amazon as both a CD and MP3 album and iTunes.