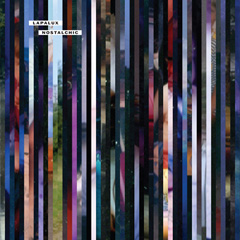 For the most part, albums manage to reach one part of you. Sometimes sight or sound is heightened, or perhaps touch. Very rarely, however, is an album able to literally impact and affect all of your senses. This, in a nutshell, is what Stuart Howard (artist alias Lapalux) does with his debut full-length offering Nostalchic. I marvel at the talent of our generation, really. Sometimes it’s truly hard to believe.

Lapalux seems to be able to feel things on a different level of reality than most. It’s no mistake that he’s officially become a part of Flying Lotus’s LA-based label Brainfeeder. With that in mind, one, at least on some small level, can understand and expect the exceptional. But this album, friends, is truly exceptional. He sort of takes the imagination of Toro y Moi and injects it with pure lysergic acid. Indeed, this is an album for wanting to get in deeper touch with one’s senses, have a visual and auditory understanding of the chemical makeup of one’s own body.

The album already gets you primed for something unexpected with its opening, Iamsys, a recording of a tape being rewound. Then we’re thrust, as if being pushed from a cliff, into some sort of purple, blue, and pink-tinged waterfall. The music is both electric and full of hypnotic blues. It’s almost like water rushing over your limbs, then somebody putting a live cattle prod in the water just to see what happens. While there are albums that overindulge and end up burning the listener out too quickly, Nostalchic simply creates a buzzing sensation all over you.

There are tracks on Nostalchic that you can see are composed to ignite the synapses and spark a confused sort of desire to explore (Kelly Brook, Swallowing Smoke). However, the grand majority of the album is just as sweet, warm honey being poured deliberately over your skin, never cooling, simply integrating with your body heat and leaving you feeling like liquid emotion. It’s purely erogenous, touching you in places that you probably shouldn’t be touched by someone you don’t know. With tracks like One Thing, Without You, and Dance, Lapalux brings us closer to his being, wrapping us in his arms and caressing us until we feel safe enough to give in to the sensuality inherent in his production.

His collaborations with vocalists Jenna Andrews, Astrid Williamson, and Kerry Leatham bring Nostalchic into the über-sensational realm, where everything is heightened to an acute awareness of the emotional context of the living world. It’s aggressively sensual, literally touching and tasting to discover every natural response to touch inherent in the human body — almost like a lover who touches you to figure out what makes you feel loved. That level of intimacy is certainly a rarity.

It’s a fine line not to go overboard with the soundscape. Some either hold back in fear of forcing too much on the listener, while others seem to delight in bombarding the listener with too many sounds at once. You have to be brave enough to reach out and touch your audience without, essentially, slapping them in the head over and over again until they submit. With his combination of musical experimentation and mellow balladry, Lapalux has found that balance and uses it to its full potency.

You can listen to the album at Xiami and Spotify. You can buy the album on iTunes or at Amazon (CD, MP3, vinyl).