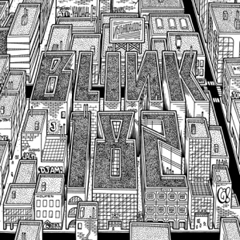 Blink-182 has reunited once again after their 2005 breakup, and now they unleash their sixth studio album, Neighborhoods.

In terms of sound and lyrics, Neighborhoods isn’t a nostalgia album to reminisce about the good old days of Enema of the State or Dude Ranch. Neighborhoods is more like a sequel to their previous self-titled album, which signaled a major departure from what Blink-182 usually stood for in terms of maturity and musical elements.

While there are a couple of tracks like Natives and Wishing Well that reminded me of the old Blink-182 — of how fun their punk riffs and lyrics used to sound around the time when they were very popular — Neighborhoods in its entirety remains a dark album thanks to its lyrical arrangement spreading death, isolation and depression across all its tracks. The album’s first track, Ghost on the Dance Floor, sets the tone for the rest of the album while at the same time refers to DJ AM, close friend of drummer Travis Barker.

On the other hand, Wishing Well — one of my favorite tracks from the album — comes across as a fun and catchy track to listen to while keeping the somber aspect of the album intact and inserting funny self-depreciation.

I went to a wishing well, and sank to the ocean floor
Cut up by sharper rocks, and washed up along the shore
I reached for a shooting star, it burned a hole through my hand
Made its way through my heart, had fun in the promise land

I could live without This Is Home and Love Is Dangerous, the weakest tracks of the album, because both don’t blend very well with the rest of the album’s tracks. The last song doesn’t end Neighborhoods on a stronger note. It reminds me of Angels and Airwaves, and that’s not exactly something I would want to remember.

On the deluxe edition of Neighborhoods, songs like Snake Charmer –a twist on the Adam and Eve story –and Heart’s All Gone Interlude served as pretty awesome follow-ups to Heart’s All Gone, an aggresive punk track. I would have prefered seeing those tracks making it to the normal edition.

In the end, it’s nice to see Blink-182 showing growth, producing an album all by themselves (their longtime producer Jerry Finn passed away three years ago) and being capable of tackling their personal issues through Neighborhoods, which serves as a healing process for the tragic events that struck the band members during the years before their reunion.