Solange – A Seat at the Table 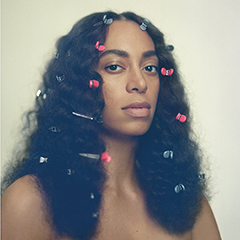 From the moment this album was released, everyone was putting Solange under a microscope simply because of who she’s related to. Make no mistake, there wasn’t anywhere to hide here. But what’s so brilliant is Solange doesn’t want to hide… anything. Let’s make something perfectly clear: there isn’t anything to compare here. What Solange accomplished deserves more than quips about her family tree. A Seat at the Table is unapologetically black, brazen in its ethnic hues.

The album starts out with positivity, a call to collect all the suffering, anger, fear, and power within and “wake up and rise.” Solange then follows that with a confession: “I’m weary of the ways of the world.” But she lives in that honesty, in fact implores the listener to be just as weary (“leery” as it were) of how the world has left you beaten, body broken and lost. This duo of opening tracks is an indication that the album isn’t a sob story. It’s not a plea for pity. A Seat at the Table is quite simply an album of truths and declarations.

Tracks like Mad, Don’t Touch My Hair, and F.U.B.U. are all raw and unfettered peeks into the black experience in this country. They vocalize the very real tedium of having to smile away anger, explain why you’re deserving of the right to live just as anyone else is: “…tired of explaining, man the shit is draining, but I’m not really allowed to be mad” (Mad).

But as with every work of art that reaches beyond the parameters of what its medium allows, there’s an element of the deeply personal. Universal truths that manifest differently for everyone trying to navigate through this human circus. Songs Where Do We Go and Cranes in the Sky give listeners access to the insecurities, frailties, and fears Solange has had to go through to reach her truth. She pours every ounce of herself in this album, drenches every fiber of the piece with who she is and where she comes from. Each Interlude touches on what it means to wear this skin, what it means to wear these naps, this nose, to see through these eyes. Each person who contributes is sharing their experiences, telling the stories and sharing the wisdom of our elders, of our brothers and sisters.

What does it mean to be thoroughly black? There’s a cadence, a sound steeped in church and field, jazz and blues, magic and strife that is unique to us. A richness in tone, a thickness in the way music is layered and spun. Solange takes classic tropes dating back to the ’20s: heavy piano and a beat deep enough to rattle the rib cage; bright brass instruments and deep breaths of wind. From the way the music sways to the collaborations, voices that are bold and simple, emotional and powerfully unique in technical improvisation. Don’t be fooled by the softness in Solange’s soprano timbre. There’s force and fire in that voice, a whisper that’s as mighty as a gale-force wind. It stems from a part of her reaching back, reaching deeper and connecting with roots so deeply imbued she can’t help but feel the heartache, joy, ugliness, and unparalleled beauty of centuries of her people.

What does this album mean in the grander scheme? It’s a step, like so many steps, to get back to expressing self, living in the absolute truth of who we are to ourselves, not to those who attempt to define us. Many will say that in 2016 there’s no way we can possibly have albums with as much impact as, say, albums from the 1960s. But understand the language about certain albums, artists, and movements was much different then than they are in hindsight. A Seat at the Table is one such album in an onslaught of albums in the last few years that impacts as powerfully as anything from fifty years ago.

Seems this is the year of the truly ethnic, black, African-American. A new Negro Renaissance that’s been in the makings for a few years now. With artists pushing for more, expecting so much more of themselves and those who truly listen to music, the landscape has become brilliant. In the midst of so much pain, death, and confusion, there is this corner of the universe that’s simply bathed in beauty. A Seat at the Table isn’t just a nice album with some exceptional vocal construction and composition. It’s an invitation to family to join in fellowship, to sit around the table and praise in voices loud and fearless. We should all be thankful Solange has opened her heart to us and allowed us to feast on the inner workings of her soul.

Please purchase the A Seat at the Table on iTunes, Amazon (MP3, CD, Vinyl), and Google Play. You can stream the album on Tidal and Spotify.