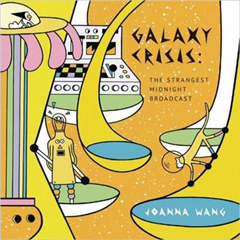 It’s official: I’d never know what I’m missing if it wasn’t for Amy’s attention to what is sure to interest me. A video-game-inspired album with a voice reminiscent of Mari Wilson? Yeah, that’s definitely an addition to the “Things That Will Always Make Me Happy” list.

Joanna Wang’s latest album is a bit of nerdy fun mixed with a 1960s mod-style vocal. When I first heard her voice I was actually rather shocked. Who is this Taiwanese pixie with a voice that really doesn’t belong to her? It was so jarring I went on a hunt similar to the pheasant hunts of old. Add to that her music video for lead single You And Me, a literal level in an old-school Atari game, and you’ve got me hook, line, and sinking battleship.

But take away the nostalgic hysteria of her music videos and the wonky visual style of Yoshaw, and the only thing you’ve got is the music and the voice. It’s obvious vocally Joanna Wang is a contradiction: a woman with the flair for a more acoustic “indie” sound but with a voice that reveals an adoration for singers like Doris Day and Nancy Sinatra. It’s lovely and unexpected. It also shows a deep knowledge of music history — no doubt compliments of father Wang Chi-ping, a renowned producer in the music industry. As such the disparate sound of classic 80s and early 90s video games with her voice is a welcome bit of nuance for anyone annoyed with the current pop music landscape.

As it is, the music itself is fascinating. Clearly, Wang’s love of video games sort of overtook her sense of reality. Taking the tinny Yamaha keyboard midis of Castlevania and Tetris, Wang builds each song like a world in her favorite games. It’s innovative, incredibly creative. However, after a while the sound becomes a bit too much and, sadly, one-note. This is, essentially, the soundtrack to a video game and sets itself up as such with the first track, Galaxy Prologue. And while it’s not something that’s really being done in pop music — at least, not on this scale — it becomes overkill about half-way through the album. The use of live band instrumentation saves it from being too monotonous (Remote Control, Galaxy Crisis), but, again, the overarching theme dictates composition.

So that leaves the lyrical content, which is straightforward and not exactly more than what’s on the surface. The words are simple enough to wrap around the syncopated rhythms of the music, as such there’s nothing exceptionally complex about them. Though the imagery in some of the songs is actually quite beautiful and fun (as in Coins, The Antagonist, and An Audience With The King), the lyrics mostly lend themselves to the music and oftentimes is overpowered by it. If the music wasn’t so heavy-handed it would’ve allowed listeners to engage with the songs more completely, but as it is, the music does become overbearing.

The heaviness of the video game theme may be a bit too much at times, but there’s no denying Galaxy Crisis is a genuinely fascinating album. It’s creative, nuanced, and truly unique. It fits in a very particular niche. However, at the end of the day, it’s a great bit of fun and certainly allowed Joanna Wang to use her voice and imagination to create something that no one has quite heard before.

You can listen to the album on Xiami and Spotify. You can buy the album at YesAsia and iTunes.