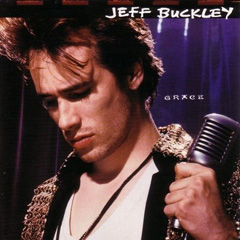 I was in a state of absolute shock the first time I heard this angel’s voice, a creeping and lilting coo putting the white innocence of the dove to shame. The man’s voice brings tightness to my heart, a constricting twist in the chest that seems to be the promise of heartache and a hard-fought bit of redemption.

In that vein, Grace is as its title suggests: a graceful product of heartache and majesty that should be praised, hands raised in the air as if in worship of a higher being that bestows beauty and elegance on the weary hearted. The album seems to be a love note to the softness and purity of life, moving effortlessly from gentle kisses in the morning to raw sexuality well past midnight.

In truth, Jeff Buckley’s is a talent that was buried under the grit of the grunge scene pushing through early 90s radio. Indeed, Nirvana would prove to be far more popular, and oddly more accessible, than the self-indulgent poetry of Buckley; however, it was Buckley’s range and impish fascination with the spontaneity of life that fascinated me. More than fascination, I would say it was an obsession with something more beautiful than I’d ever dealt with.

Many of the tracks are more polished representations of songs he penned and practiced during his days as a member of the Captain Beefheart spinoff group Gods and Monsters with guitarist Gary Lucas, and frequent primetime act at a little hole in the wall café known as Sin-é. As such, Buckley relished the opportunity to truly let his voice explode into the bursts of starlight that made up most of the songs on the album.

Grace opens with soft promise, fluttering in on butterfly wings and shaping the tone of the album (Mojo Pin). Grace, however, blasts through like shameless rays of sunshine and introduces the world to a voice that was more medieval grit than the hard-edged, new age growl of his peers in grunge.

Most would cite Buckley’s rendition of the ever-lionized Leonard Cohen classic Hallelujah as the singer’s most important offering to the world of music, but then, of course, they would be missing what was so genuinely brilliant about Buckley. The entire album was something of a kiss of recognition to his days as a full-time troubadour, guitar in hand and voice free and fearless.

With his own compositions ranging in tone and color — from self-reflection (So Real, Dream Brother) to heart weary (Lover, You Should’ve Come Over) and even the piss and vinegar of his own version of grunge (Eternal Life) — and tributes to the likes of Nina Simone (Lilac Wine) and Benjamin Britton (Coropus Christi Carol), Grace was a moment in music that changed its scope and potential. It allowed the world to see that even in the rough and tumble of gangster rap and grunge, there was a lotus of purity blossoming and expelling its rich odor into the air for us to bask in.

As Jeff Buckley’s first and only full-length album — a tragic swimming accident claiming his life far earlier than any human with that much art and love in his heart should leave this world — Grace is one of the most powerful pieces of music to come out of the 90s. It not only gave the world an appreciation of the decidedly esoteric. What this album did was put a drop of uncorrupted perfection into the world, allowing it to see what music could do if put in the hands of someone left open and unafraid. Jeff Buckley is one of the world’s most underrated talents, but also one of its most important. With Grace we were given a gift, a moment of bliss and elegance that was way too short but much more than we probably deserved.

You can listen to the album at Xiami or Spotify. You can buy the album on Amazon as a CD or in MP3 format or on iTunes.

Part of the YAM Magazine Time Machine Blogathon: Back to the 90′s.