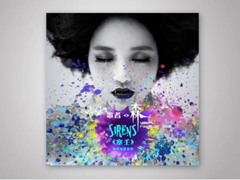 A lot of people are quite surprised with the freshness in the sound of SingerSen — 歌者森 Ge Zhe Sen, for those of you interested. People, music in Mainland China is not just idols. There are those who are actually fusing electronic music with a lot of ethnic influences like Sa Dingding [1], Chang Shilei’s Niu China is also a decent example, and even Laure Shang is following that trend.

Of course, part of SingerSen’s sound comes from her collaboration with Guy Sigsworth, the guy behind the likes of Bjork, Imogen Heap (also Frou Frou), and even giving Alanis and Britney their pop electronic-infused sounds.

SingerSen’s Sirens (塞壬) is no exception. The sound is infectious, the beats are Sigsworth’s signature, but added to SingerSen’s Mandarin vocals, it gives the production a killer distinctiveness. Drunk is probably the best track on the whole EP. It opens the whole album and it might actually be hard to live up to. Once the chorus breaks with the almost chanting, combined with the beat, it sucks you into the atmosphere. Energetic and powerful all at the beginning, which comes as a shock when Sirens begins with the soft melodious vocals reminiscent of Imogen Heap’s Frou Frou days.

Wolf is possibly the most ethnic-sounding track on the whole album and it actually reminds me a lot of Sa Dingding’s music, which goes in contrast to Longing, which is the most dubstep-influenced track. It becomes a signature, however, when SingerSen breaks into those 爱情，爱情，爱情 [Ai qing, ai qing, ai qing / Love, love, love]. Which reminds me, Mandarin, such a delicate and hard language to compose in.

Miss Spider is also a powerful track with loud vocals — once the almost happy-sounding verses are over — while Snow Queen starts out with backing vocals, reminding us of Bjork, that turn into more of her as SingerSen explodes into her chorus. The whole song relies on its soft melodic verses. It ends Sirens on the perfect tone.

Preview on Xiami.com | Like it? Buy it on Amazon MP3 | iTunes