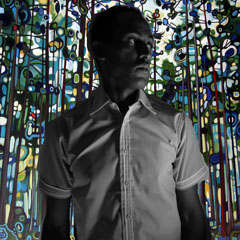 On days when you feel like there’s almost nothing, sometimes all it takes is a piece of music to make your world right again. Today was such a day for me. In comes Wes Felton like divine intervention, bringing an album that picks apart every aspect of my heartache and helps pull me out of it.

Imagine the Future is a living, breathing entity. It knows exactly what to say and how to say it to motivate even the weariest heart to begin the day. Each song is a moment in time that both expresses pain and love’s sudden ability to resurrect you. As with all music from Felton, love comes in so many facets and has so many dimensions. It’s ugly and gorgeous, glorious and utter torture. It’s both personal and universal and can be intimate or incredibly open.

Beyond just the emotional brilliance of the piece, the music on Imagine the Future is tender. It doesn’t proclaim to the heavens, and it’s not bombastic. It’s smooth and luxurious, tame and yet so perfect for coaxing the heart and body to reanimation. There’s a taste of Blues in every ounce of this album, but then the sensual coyness of R&B and back-arch inherent in Soul twist it into something more visceral, an experience so palpable you’re forced to do away with notions of leaving the world just to have a longer taste of it. Felton’s music is auditory cocaine—one taste makes you crave it.

There’ve been few artists in recent memory that have been able to force hip-hop to be more than just the sum of its parts, and even fewer as elegantly as Wes Felton. He puts it in a pot and melts in a heavy dose of pure Soul, then sprinkles in the simple ache and crack of his voice. With Imagine the Future, he takes the time to speak of the wholeness of love (All the Way, The One). He then pours light into the darkest corners of the world around us, giving form to those lurking in the shadows (Real Monsters). Still he takes time to paint intimacy and overt sexuality in a hue of blue melancholy (Thy Will Be Done), chasing sex quickly with proverbs and giving new meaning and dimension to the Bible stories of old.

There was one song on Imagine the Future that inspired me to finally open my eyes—Cupid’s Arrow. The entire song is a map of every thought and nightmare that all but crippled me for most of the day. Then it filled my sky with stars to guide myself back to the world. Yet one line allowed me to see the music in life once more: Sometimes living takes way more courage than killing yourself when you ain’t feeling yourself. Simple? Yes. But the soft command of it, the blunt-force truth in it woke me the hell up.

Imagine the Future is a blessing. Each song brought inspiration to my heart, allowing me to reach up and grab on to his voice and bring myself back to life. He dared me to see beyond today, beyond the next 30 minutes. That’s what the album is: a dare. It’s an invitation to imagine how beautiful life could be if you could see past the ugliness of the moment.

You can listen to and buy Imagine the Future on Wes Felton’s Bandcamp. You can also buy it on iTunes.