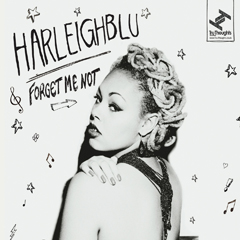 It’s no surprise that one of the most promising soul singers of 2013 hails from the UK. England has a fondness for raw soul and rare grooves, a fascination that goes back to the late 80s and early 90s with the Brave New Heavies and Jamiroquai. Next we have Nottingham native Harleighblu, an explosive soul singer with range and talent that belies her 21 years. Her debut definitely belongs in the canon of young singer/songwriters from the British Isles bringing us their brand of good old-fashioned Soul music.

As with quite a few debuts I’ve heard, Harleighblu’s Forget Me Not goes for the jugular quickly, immediately giving the audience a powerful display of vocals, strong lyrics, and top-notch composition (lead single Enough Now). She definitely delivers a vocal that’s all power, nuanced, and definitely classically soulful. Harleighblu has a stunning grasp of soul music, an almost innate sense of timing and improvisation reminiscent of the rare grooves and Soul music she grew up on. Her voice is unbelievably rich and contoured, multi-faceted and mature. At the tender age of 21, she’s already managed to reach into herself and bring to light astonishing vocal ability.

However, one thing that many debuts tend to fall prey to is leaping in too strong too fast. Vocally and musically they want to impress, but that leaves the lyrics, at times, lacking in one area or another. Forget Me Not uses its grand musical landscape and Harleighblu’s vocal prowess to introduce an artist wise beyond her years composition-wise. The lyrics are, in fact, quite mature, speaking of the proverbial rollercoaster ride that is a relationship. Her songs are written with great clarity and are at times incredibly evocative. However, there are moments early on in the album when it tends toward the obvious or even one-note, with a few songs back to back sending the same message of two-timers and emotionally immature men (Casanova, Let Me Be).

That being said, Forget Me Not has moments of absolute brilliance musically, conjuring up those memories of first kisses set to Al Green or Natalie Cole: romantic, magical, and just plain lovely (I Believe, Love Of My Life). In between those glimpses of loveliness, there are even majestic moments of strength in which we get a peak into Harleighblu’s resolve and her unexpectedly mature fortitude (Enough Now, Play Me). And still, she manages to paint most of the album in bits of subtlety, relying on musical nuance and stellar vocal arrangement, using simple and repetitive (though never redundant) lyrics to give the audience something to continuously gnaw on long after the songs fade to black (How Deep Is Your Love).

As far as debuts go, Forget Me Not is a bit of surprise for its guts, its maturity, and its great homage and respect for classic Soul. She takes bits of 60s doo-wop and melds it nicely with smooth R&B from the 70s to bring us an album that’s both mature and musically powerful. Her future is not only bright, it’s a godsend. A voice this purely soulful and music this clean and at moments grand is of the caliber and level listeners associate with timeless artists who remain in our collective consciousness for decades.

You can listen to Forget Me Not on Xiami and Spotify, and you can listen and buy it on her Bandcamp. You can purchase it on iTunes and Amazon (CD, MP3).