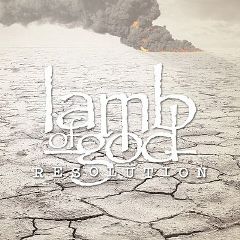 Lamb of God’s seventh album Resolution starts slowly through current USA Presidential candidate [1, 2] Randy Blythe’s screaming vocals on Straight for the Sun. However, the album quickly spins into rage-driven riffs with relentless intensity without missing a beat on many of the album’s songs such as Desolation, Ghost Walking, Guilty and The Undertow.

Resolution is a well-crafted raw-sounding album with pretty good production value that allows the band to explore different song structures and feel creative. For instance, The Number Six allows all the band members to shine and Randy Blythe’s voice sounds gritty. Instrumental song Barbarosa breaks up the fast pace briefly and has the Pantera influence attached to it, sounding brilliant and haunting at the same time.

The only problem Resolution faces might be the fact that a few songs might sound a bit repetitive. However, the musicianship from this band as well as the aggresiveness makes Resolution worth a listen.

Best tracks: The Number Six and King Me.

Preview on Xiami.com | Like it? Buy the album on Amazon | iTunes