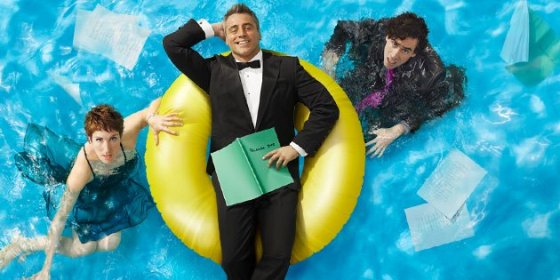 Watching things go to hell for Sean (Mangan) and Beverly (Greig) was fun during Season 1 of BBC/Showtime’s Episodes. As if watching their TV show getting dumbed down wasn’t bad enough for the Brits, Season 1 ends with Matt LeBlanc (himself) sleeping with Beverly despite their mutual hatred.

After a violent brawl and a heated discussion, Sean — who was optimistic about working in the States, unlike Beverly — was ready to flee LA and get divorced. However, the Pucks! pilot gets the greenlight.

Season 2 takes a 4-month jump as Pucks! goes under production, awkwardly forcing everyone to work together and improve the show’s ratings against ABC’s “talking dog show”. But when it comes to dealing with the Episodes characters, Season 2 is about the choices they make and how it can affect them for better or worse, especially when it comes to the likes of Merc — whose refusal of developing the “talking dog show” backfires on him big time — and Matt.

If Season 1 had the sex-shallowed Matt LeBlanc separating Sean and Beverly, Season 2 has him going through a darker path, and it doesn’t end well for him. Not only does he start an affair with Merc’s wife (Genevive O’Reilly), but he also has a strange relationship (and twisted backstory) with his cute stalker Labia (Sophie Rundle). A highlight of LeBlanc’s mistakes is when he tries to recruit his former Friends cast members to guest on Pucks!, but it turns out that he burned his bridges with all of them and he only manages to get a less popular “friend” instead.

Episodes continues to poke fun at Hollywood, and it even takes a shot at LeBlanc himself (“Keep laughing! For the rest of your life, you’re just going to be the fat guy who used to be Joey!”) as well as making you wonder who the industry people David Crane and Jeffrey Klarik are refering to in their jokes and storylines. Season 2 is heavier on the Friends references than Season 1, but it displays better performances from its cast along with showing heart for its characters.

LeBlanc’s acting chops are much better than they used to be on Friends and Joey — he’s still funny, but he was also great during a dramatic scene when he dealt with weight gain and depression. Tamsin Greig and Stephen Mangan are the ones who handle the show’s emotional parts with humor and subtlety, as Beverly spends most of Season 2 trying to win Sean back, who’s unsure about returning with her after having an affair with actress Morning (Mircea Monroe).

While I wished that Daisy Haggard as Myra — the network’s humorless head of comedy — did more than just her hilarious facial expressions, Season 2’s biggest character upgrade is seen on Merc’s assistant (and lover) Carol (Kathleen Rose Perkins). Perkins did well with the Carol & Merc scenes, but she’s stellar when the show tackles Beverly and Carol’s friendship, which provides plenty of laughs and shows great chemistry between her and Greig. If Season 3 happens, I hope she gets more screen time, considering where Carol stands after Season 2 ends.

Episodes isn’t without its flaws despite Season 2 being more fun. Some of the jokes can be cheap, but that partially happens when the network is producing something like Pucks!, which gets messed around during the entire season. James Purefoy, who plays Morning’s brother Rob, has a terrible American accent. John Pankow’s Merc resembled a lesser version of Ari Gold from Entourage, but he still managed to get some laughs unlike the Brits’ assistant Wendy (Scarlett Rose Patterson), who was a April Ludgate (Parks and Recreation) ripoff. Beverly’s storyline could have been spaced better because the resolution felt a bit rushed, yet it happened that way because the Season 2 finale — which works like a series finale — resolves almost every storyline Episodes built.

There’s still a few ways to continue Episodes with a third season through some unresolved storylines with Carol and Matt, but I can live with Season 2 ending the series on a good note.